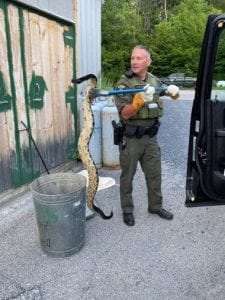 NYS  Environmental Conservation Officer George LaPoint reported that he responded to a residence in the town of Hague, Warren County, for a report of a trapped timber rattlesnake at residence where a family was vacationing on August 2nd.

Upon arriving at the home, ECO LaPoint located the snake outside trapped under a tote. Using snake tongs issued by DEC, along with a cloth bag and bucket lid, he safely secured the rattlesnake in the bucket and removed it from the premises.

ECO LaPoint transported the rattlesnake to DEC’s Green Island maintenance facility where it was temporarily held until it could be released to a suitable location. Timber rattlesnakes are a threatened species in New York.

Rattlesnakes are fairly common in the northern Lake George watershed and are present in other areas around New York State. For more information on timber rattlesnakes, visit DEC’s website.

If you are inn rattlesnake country, be alert, pay attention to the trail ahead of you and areas adjacent to the trail. Rattlesnakes do not always rattle just because you are close. If you spot a rattlesnake keep away or move slowly away. The snake will likely want to move away from you don’t block its escape. Do not harass or harm the snake – it is unsafe and illegal to do so.

Photo of ECO LaPoint with a timber rattlesnake in Warren County provided.