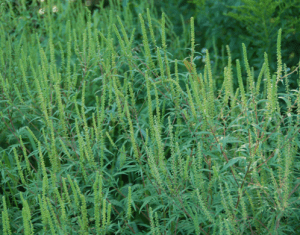 I love the summer. It’s the time of year when animals are most active; when the sun is warm and plants of all kinds are thriving; and when the first harvests start to ripen.

I was talking with a friend of mine recently and asked his young grandson if he liked the flowers in my garden. His response was, “Plants make me sneeze,” to which I lightheartedly replied, “Me too.”

Unfortunately, summer is also the time of year when allergies, including my own, tend to go into overload. It begins with pollens released by trees. Then by grasses. Then by weeds and even some garden flowers.

I always have tissues with me; in my pocket or in my hand. Always. And, when I pack for a weekend away, I have to stockpile tissues and meds; at least one full box of tissues and a stash of pretty much every over-the-counter allergy- and asthma-relief medication I can find at a drug store, along with one or two prescription treatments. (Occasionally, when my allergies are really bad, it can trigger my asthma and wheezing.)

Pollen is one of the most common causes of allergies in the United States. According to the American Academy of Allergy, Asthma and Immunology (AAAAI), roughly 8% of Americans, age 18 and over, live with pollen allergies; or allergic rhinitis.

Allergic rhinitis is more commonly known as “hay fever.” But, hay isn’t the issue. Hay just achieved blameworthiness because people with allergies noticed they were sneezing and rubbing their eyes a lot, during the “haying,” or hay-cutting season; when allergen-producing plants are making their sinus-irritating pollen. Hay fever occurs when an outdoor allergen, such as pollen (or outdoor molds), triggers an allergic response and your immune system reacts. Or, more accurately, overreacts.

In essence, the immune system mistakenly identifies the harmless pollen as a dangerous intruder and begins to produce chemicals to fight against the “invading” pollen. The inner lining of the nose and the upper airway, unsurprisingly, become inflamed. When the inflammation lasts only a few days, the condition is referred to as acute. When the condition is long term; often lasting more than four weeks; it’s referred to as chronic.

It’s hard to comprehend how microscopic plant gametes can cause so much misery. But, it’s widely accepted that allergies set in when your immune system misjudges a grain of pollen, which is an otherwise harmless protein, and assumes it to be a threat. Once your immune system has gotten it wrong, you’re stuck with the allergy, often for the rest of your life.

Which Plants Cause Allergies?

In some species, plants can use the pollen from their own flowers to self-fertilize. Others rely on cross-pollination; meaning that fertilization and seed formation can take place only if pollen is transferred from the flower of one plant to that of another of the same species. Insects and small animals (e.g. hummingbirds) do this for certain flowering plants, while other plants rely on the wind to distribute their pollen.

Insect-pollinated plants generally have showy, colorful flowers that are fragrant and/or nectar-bearing and that usually produce a rather small quantity of relatively large, heavy, sticky and/or spiny pollen grains, which are not easily transported by the wind and, therefore, unlikely to be the source of an allergic reaction.

By contrast, wind-pollinated plants develop comparatively unremarkable flowers that produce enormous quantities of tiny, light, feathery, pollen. A single ragweed plant can generate and release a million grains of pollen a day. These minute pollen grains are distributed by the wind, sometimes in billows or miasmas, over such great distances that scientists have collected samples of ragweed pollen 400 miles out at sea and 2 miles aloft. It’s this excess of windborne pollen that creates problems for allergy sufferers as it settles, often unseen, on our hair and our clothes, and in our eyes, mouths, and nasal passages.

A first-time allergic-occurrence can happen at any age, or recur after many years of remission. As a rule, however, allergies are more common in children. And, when children seem irritable or unfocused, they may be reacting to pollen or some other allergen.

Pollen generally causes the greatest misery in the morning. Windy days can make symptoms worse by stirring up pollen that’s already landed on the ground. And rainy days may provide a breather by washing the pollen out of the air.

According to AAAAI, climate change has both increased the intensity of the pollen season and prolonged its duration. Increases in carbon dioxide were shown to lead to an increase in plant reproduction and total pollen levels in many plant species. Ragweed pollen, for example, has been increasing in concentration, with models predicting that levels will increase by 400%, within the next 30 years.