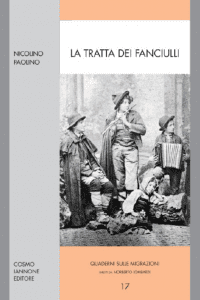 The Industrial Revolution ended life’s traditional muted tones and unleashed the supremacy of mechanical clamor. Technology and commerce combined in an all-out assault on stillness.

In April 1936 the city of New York’s Noise Abatement Bill became law. The measure had been preceded by a long campaign against the ever-increasing loudness of city life. It started as a crusade against the omnipresence of unlicensed street musicians. 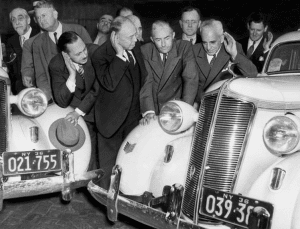 Put together the Italian passion for machinery and love of music, è presto – a barrel organ. The first descriptions of this machine-like device date back to the late eighteenth century. From the start, Italian migrants were involved in the production of these instruments, running such companies as Frati (Berlin), Gavioli (Paris), or Gasparini (Paris).

The phrase “organ nuisance” became a headline by the mid-nineteenth century to designate the wider problems of blaring and begging. Through this synecdoche a single performer was blamed for the totality of noise pollution. Sensitive Londoners and New Yorkers were driven to despair by organ grinders. 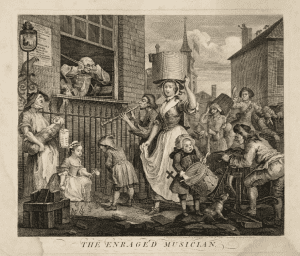 An 1820 editorial in The Times of London condemned the “slave trade” whereby London-based padrones “imported” children from destitute Italian parents. These youngsters were given a street organ and sent out to beg. In a practice known as tratta dei fanciulli, the boss supplied substandard lodgings and took all earnings.

Parma-born Luigi Rabbiotti was recorded in the 1841 census of the United Kingdom as a married man, living in Laystall Street, Clerkenwell, an area known as London’s Little Italy. Leading a seemingly respectable life, his house was shared by twenty-five organ boys. One of them, fifteen-year old Giuseppe Leonardi died in the street of lung disease in 1845. Rabbiotti was charged with manslaughter, but acquitted. The abusive padrone system persisted. Such was the local demand for instruments that barrel-organ manufacturer Giuseppe Chiappa ran a flourishing business at Little Italy’s Saffron Hill.

From the mid-century onwards, London’s decibel count was rising steadily as commercial activity intensified and numbers of inhabitants grew. During the 1850s and 1860s Italian grinders were accused of being the main culprits. Over a thousand of them were recorded as plying their street trade. Their discordant “music by handle” violated harmony and deafened delicate ears. Continuous clamor outside Thomas Carlyle’s terraced house in Cheyne Row, Chelsea, made him install a soundproof “sanctum” to shut out “vile” organ grinders.

In the public debate, two stances were taken in highlighting the problem. One side stressed noise pollution and criminal involvement in the activity. Those who held this view called for legal intervention. Reformers argued that young grinders were victims of exploitation. They pointed to the need for protection and education of the youngsters involved. 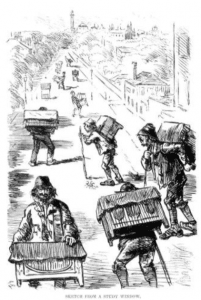 In May 1864, beer brewer and liberal Member of Parliament Michael Thomas Bass put forward a bill to mute street music. To coincide with political deliberations he published a 120-page book Street Music in the Metropolis, the centerpiece of which was a letter penned by Charles Dickens and co-signed by twenty-eight leading artists and scientists who, according to the novelist, were “interrupted, harassed, worried, wearied, driven nearly mad” by “brazen performers on brazen instruments.”

The resulting Act was an attempt to suppress organ grinding. The miserable condition of child-musicians was ignored. As late as 1876, Thomas Barnardo called for the rescue of “white slaves” from Italy. It was not until 1889 that a charter was passed to stop child exploitation. 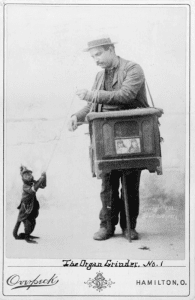 The streets of New York rivaled those of London in levels of noise. Street criers, newsboys, and musicians outshouted or outplayed each other to attract the public’s attention. From the middle of the century onward, organ grinders were singled out for special scorn. The mobile barrel organ had become the most commonly heard instrument on New York’s pavements.

In 1853, Charles Loring Brace was commissioned by The New York Times to write a series of articles entitled “Walks among the New York Poor.” To gain an insight in socio-economic conditions, he joined a group of organ grinders.

His research convinced him that little could be done to lift the adults he had observed out of a state of depravity. Instead, he focused on the shocking number of children (known as “street Arabs”) who were sent out to beg. Others had organized themselves in gangs of newsboys (and girls) and bootblacks fighting to guard their hard earned coins. Brace would found the Children’s Aid Society with the (missionary) intent to supply education to abused children and, ultimately, to assimilate them into a (Protestant) American way of life.

New Yorkers associated organ grinding with the Five Points neighborhood in Lower Manhattan. In 1880, in the midst of massive immigration from Italy, nearly one in twenty men living in the neighborhood was an organ grinder (whereas in London it was a predominantly juvenile “problem”). Instruments could be rented from a dealer in Baxter Street, or bought from a manufacturer a block away in Chatham Square. Baxter Street even housed a “simian academy” where capuchin monkeys were trained to accompany the organ grinder and entertain a crowd of onlookers. 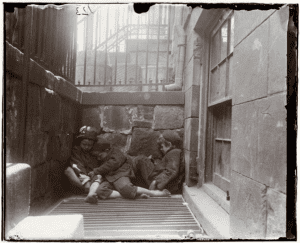 The “barrel full of tunes” produced a loud and scraping sound. When a “tingalary man” stopped outside his London home, Thomas Carlyle felt like running out and murder him on the spot. In 1858, New York’s Evening Post published a satirical article entitled “Some Considerations Touching Organ-grinders, and the Lawfulness and Propriety of Putting Them to Death.” In the desire to improve the urban quality of life, noise became a central issue.

Having long suffered the whistle-blasting tugboats on the Hudson, physician Julia Barnett Rice founded the Society for the Suppression of Unnecessary Noise in 1905. She claimed that urban clamor impeded the recovery of thousands of hospital patients. She recruited Mark Twain, Thomas Edison, and others to join a campaign to bring calm to the city. The Society would eventually achieve the creation of quiet zones around hospitals and schools.

In Britain too urban noise was considered a medical issue. In 1916 Scottish physician Dan McKenzie published The City of Din: A Tirade against Noise in which, from a medical point of view, he warned that continuous loudness and intensity of volume would have a negative impact on the mental and physical health of the nation. 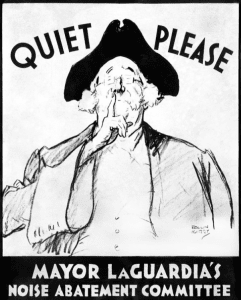 Fiorello (“Little Flower”) Henry La Guardia was New York’s 99th Mayor. A pro-New Deal reformist Republican, he served three terms from 1934 to 1945 and is remembered as a charismatic character who took on political corruption and revitalized New York’s political administration.

One of his first acts in power in 1935 was to refuse the renewal of licenses to street musicians. He imposed immediate action against those who disobeyed the ruling. October 1935 was proclaimed the month of “noiseless nights.” Radio announcers were instructed to tell their listeners to turn down their radios after 11 pm and police officers were sent out to identify “noise offenders.” The Mayor barred all street musicians, not just organ grinders. In the age of Depression, a considerable number of buskers lost their livelihood as their work was criminalized as begging.

Both noise moderation and the busking ban were part of a planning program for future urban development. A truly modern city should maintain an orderly and well-maintained public space, and guarantee clear streets for the unimpeded exercise of economic and commercial activities. In such a context, the presence of itinerant performers was an anachronism.

Barrel organs disappeared from the streets. Hundreds of organs were destroyed, the barrels of which contained a record of the popular music of the day. Preceding the invention of the cylinder record player, the barrel was the only permanent recording of these tunes. It was ironic that a Mayor of Italian descent was responsible for the destruction of part of New York’s Italian heritage.

Illustrations, from above: La Tratta Dei Fanciulli cover; The 1936 Noise Abatement Bill prohibited the prolonged blowing of a horn; The Enraged Musician (1741) by William Hogarth; Sketch from a Study Window (1863) by John Leech; An organ grinder with a monkey, 1892; Street Arabs in Mulberry Street (Little Italy), 1889 by Jacob Riis; A poster from the 1930s during Mayor La Guardia’s anti-noise campaign.