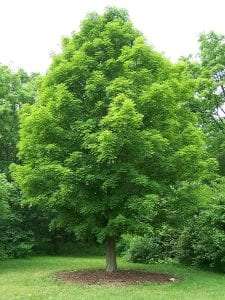 To a highly mobile species like humans, the fact that other animals relocate their families – or entire populations – isn’t a big surprise. We know historical migrations have been the norm, though the fossil record shows that generally these changes happened at a snail’s pace.

The “Great American Interchange” in which northern animals spread southward and South American critters expanded north during the Pliocene Epoch, took a million years. Give or take a few, I assume.

Well, thanks to climate change, an eye-popping number of species are now actively seeking new real estate. As reported in an April 27, 2017 National Geographic article, half of all animals are moving apace into cooler habitats.

Land species are shifting their home ranges – primarily north, but some to higher elevations – at an average rate of a mile annually, while marine species are progressing toward the poles at about four miles per year. Some transitions are drastic. A study done at the University of Plymouth in the UK found that Atlantic cod have shifted northward 125 miles in the past decade.

Unless trees are wondrously furtive, I’m pretty sure they don’t travel. Yet a report from the US Forest Service’s Northern Research Station indicates that 70% of Eastern tree species have already begun to shift their ranges to the north. The authors admit this is not a new trend, but rather the hastening of an old one. They say that:

“Tree ranges in ancient times certainly shifted according to changing climates, but the changes were relatively slow. Fossil plant and pollen records show tree species’ ranges shifted northward a rate of 50 km per century as temperatures rose after the retreat of the North American ice cap. Such shifts are sometimes called ‘tree migration,’ but they are really changes in a species’ population density and range. The more accurate term is ‘tree range migration.’”

OK, so Mother Nature apparently moved tree species an average of 50 kilometers (31 miles) every hundred years. This helps put in perspective a study report entitled “Shifting with climate? Evidence for recent changes in tree species distribution at high latitudes,” published in the journal Ecosphere in July 2014.

I admit that this is a highly technical paper, and I may have pulled a muscle trying to understand it all. The study assessed changes at several different latitude points, and also compared sapling redistribution with that of larger trees. In addition, the authors noted that factors other than climate change no doubt had an effect on tree range migration as well.

However, their report concluded that “Five out of the eleven species examined (Sugar Maple, Red Maple, Paper Birch, American Beech, and Trembling Aspen) showed significant northward migration.” What stood out to me was that taken as a whole, they found that since 1970, “The average overall [range] shift was 111.2 km [69 miles] at 49° N.” Contrast that with historical natural movement of 50 km in a century.

Scientists at the US Forest Service believe that by the end of the century, at least 8, and possibly as many as 27, tree species will have moved 200 kilometers (124 miles) north. In fact, they project that in the year 2100, sugar maple will exist almost exclusively in Canada.

There may well be exceptions. It’s possible that enclaves of species which are projected to move out of the region will be able to survive in isolated nooks and crannies of the Adirondacks and other similar terrain. Variation of slope and aspect in the mountains creates “Climate Refugia,” micro-habitats conducive to a broad spectrum of tree species. These refugia resist change – they are not immune to it, but adjustments happen more slowly there.

Change is sometimes good, but it’s always scary. Luckily, we do have agency in determining our future. According to the Canadian Association for Educational Resources, “By 2100 the atmospheric CO 2 concentration (the gas responsible for most temperature change) will be between 540 and 970 ppm,” depending how much carbon dioxide we pump into the air.

The huge discrepancy between those two numbers offers us a chance to slow the rate at which tree species march northward. It’s hard to feel motivated when we know our decisions are a drop in the pool. Well, drops matter. It takes something like 50 billion drops to fill an Olympic-size pool. If each Earthling coughed up (figuratively, please) 6.4 drops, it would be full.

No matter where we live, everyone has access to a dropper of some sort. Maybe it’s trading our 4×4 for a car with snow tires. Maybe it’s planting a tree. Or biking to work, or switching to LED bulbs. Every drop makes it less likely the next generation will ask “Hey Grandma (or Grandpa), tell me that story again about when maples grew here.”