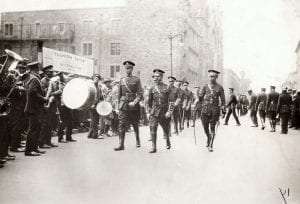 At a library in London he read Booker T. Washington’s Up From Slavery in which Washington, the founder of the Tuskegee Institute in Alabama, urged that African-Americans pull themselves up and establish black institutions, over seeking equal rights through integration. 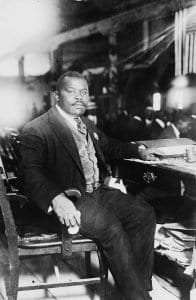 Garvey came to the United States in 1916 in the hopes of meeting Washington, but Washington, with whom he had corresponded, had recently died.

While in Jamaica, Garvey had formed the Universal Negro Improvement Association and African Communities League (UNIA-ACL) whose purpose was to encourage black people worldwide to form their own enterprises and institutions, and also to seek an end to white colonialist domination in Africa.

Now in Harlem, Garvey spoke on the street (including at 135th Street and 7th Avenue, near today’s Schomburg Center) to promote the UNIA-ACL’s program. At the time, Harlem was becoming the cultural, political and intellectual capital of Black America (see “Philip Payton and the Development of Black Harlem”).

Garvey was highly skeptical of strategies that sought cooperation by white people, which he believed could not be trusted. (Among other things he worried white people, especially Jewish people, would ultimately seek to dominate these organizations). In his view black people should operate separately, a message that was not always in tune with established black leadership in Harlem.

Garvey attracted attention when Hubert Harrison, a leading socialist who A. Philip Randolph called “the father of Harlem radicalism,” asked him to speak at an organizational meeting of Harrison’s Liberty League at AME Bethel Church in Harlem.

Garvey made an impassioned plea for black people to assert themselves around the world, noting particularly their subservient position in their native Africa and the need to return their to reclaim their rightful political heritage, by force if necessary. 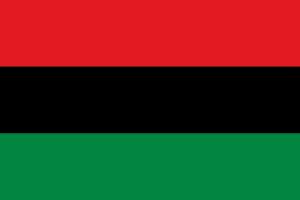 The UNIA-ACL, soon expanded into a half-built church at 120 -128 West 138th Street which was named “Liberty Hall” (after the headquarters of the Irish Citizen Army, which had led the 1916 Easter Rising).

At Liberty Hall they unfurled the Red, Black, and Green flag now associated with Pan-Africanism and Black Liberation. Garvey’s UNIA-ACL invested in black-owned businesses, and established the Black Star Line. (The initial sailing of the Black Star’s Yarmouth to Cuba and Central America drew an estimated 100,000 people to meet the ship in Panama.)

In 1920 UNIA-ACL organized at Madison Square Garden the First International Conference of the Negro Peoples, attended by more than 25,000. On August 3, 1920 thousands of members of the Universal African Legion, UNIA-ACL’s military arm, proudly marched in full regalia through Harlem, a display of African American power that would be repeated many times in the following years.

Garvey encountered conflict with the established Harlem leaders, particularly W.E.B Dubois and the NAACP. His program of black separatism, hostility to efforts to obtain equal legal rights for blacks, and support of racial segregation (which Booker T. Washington had also endorsed), and his broad support in Harlem did not endear him to those who were seeking to rebuild the Reconstruction Era Civil Rights coalition in a multi-racial society. They were particularly outraged in 1923 when he met with and sought support from representatives of the Ku Klux Klan who endorsed his plans for returning to Africa.

At the same time, Garvey was the target of concentrated attacks through subversive means by the United States Government, including J. Edgar Hoover, who added his name to the list of those to be supressed through the Palmer Raids. Later, when the Black Star Line failed, federal prosecutors indicted him for mail fraud, and in 1924 he was convicted and sentenced to five years in prison.  His sentence was commuted after he served two by President Calvin Coolidge, on condition that he be deported to Jamaica and never return.

In 1930, James Weldon Johnson, a prominent Harlem-based leader of the NAACP, assessed the impact of Garvey’s movement in Harlem in his book Black Manhattan. He was largely complimentary of Garvey’s work, especially in encouraging black institutions. He was dismissive however, of Garvey’s hopes of regaining Africa through force, considering it impossible and irresponsible.

Undoubtedly, many adherents to Garvey’s ideas were disappointed at his death in London in 1940. Garvey’s wives, first Amy Ashford, and particularly his second wife Amy Jacques Garvey, sought to keep his ideas alive. They helped publish his speeches and sought to hold together the UNIA-ACL.

In 1945, Amy Jacques, George Padmore and Kwame Nkrumah, organized the Fifth Annual Pan African Conference in Manchester, England (attended by W.E.B. Du Bois). There they laid plans to raise the Red, Black, and Green throughout Africa. Kwame Nkrumah returned to his native Ghana to lead its independence movement and become its first Prime Minister and President.  Another participant in the Manchester conference, Jomo Kenyatta had similar success in creating Kenya.

Today, although Garvey never set foot in Africa, his program of African leadership of Africa has been vindicated. A variation of the Red, Black and Green now flies in triumph over black led capitals of Kenya, Biafra, and Malawi and is a recognized symbol of Pan-Africanism around the world. His ideas helped shape such movements as Rastafarianism, the Nation of Islam, Black Power and more.

Although Garvey is recognized in Marcus Garvey park in Harlem, there is no indication of the importance of the nondescript residential building at 120 West 138th Street – Liberty Hall – where African independence movements were given a boost in the early 20th century.