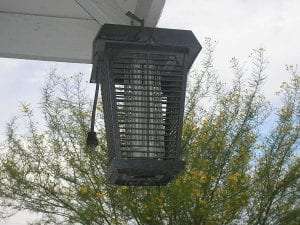 To paraphrase Marvin the Martian, a cartoon character whose attempts to conquer Earth were always foiled by Bugs Bunny, “Zap first and ask questions later.” The little alien with the big Illudium Q-36 Explosive Space Modulator ray-gun was so jumpy that he zapped anything that moved. In the end, though, he never hit anything which could remotely be considered a threat.

Each summer, bug zappers are hung with care in millions of back yards, much to the delight of residents who imagine that the bright electric arcs and snappy sound effects mean that mosquitos and other pests are being vaporized. The truth is that bug zappers, which range in price from around forty dollars to well over a thousand, are less effective than Marvin the Martian.

To be clear, these devices massacre insects – something like 71 billion annually in the U.S. – but according to a University of Delaware study, mosquitos comprise a mere 0.22% of the deceased. Bug zappers are consummately worthless for mosquito control.

But that’s not the real problem.

The snag is that insect-electrocution light traps are superb at killing beneficial insects which would otherwise be hard at work killing pests like aphids, sawflies, leafhoppers, thrips, deer flies, and yes – mosquitos. To connect the dots, bug zappers create more pests. The Harvard Medical School, on its Zika virus page, warns “Don’t buy a bug zapper. Studies have shown that these do not reduce mosquito bites, and may actually increase mosquito populations by killing off beneficial insects that prey on mosquitoes.”

I hesitate to mention that the majority of these pest-killing insects getting electrocuted are species of wasp, which is a scary word that doesn’t sound like it belongs next to “beneficial.” It’s like talking about “cuddly scorpions,” or “invigorating poison-hemlock wine.” But these are not like the wasps you’re thinking about. Beneficial wasps can be smaller than a fruit fly, and most of them make a house fly look big. To quote a University of Maryland fact sheet, “Beneficial wasps may be the single most important biological control method gardeners have.” Another selling point: they do not sting.

To summarize, bug zappers are pricey gadgets which burn electricity and heaps of beneficial insects, yet essentially fail to kill anything that bites people, while at the same time succeeding to make our lives more pest-ridden than they already are.

But that’s not the whole difficulty either.

A grievous complaint against these devices is that nearly all of the corpses which pile up under them belong to pollinators. Even the tiny helpful wasps mentioned above do their part to spread pollen around. Yet moths are disproportionately slain by backyard bug-toasters. These fuzzy flying machines are as capable as honeybees at helping flowers have sex, but we never think of moths as pollinators.

Probably because we neglect go look at flowers in the dark. Moths are the pollination night shift, and they’re falling prey to the siren-shine of bug zappers.

However, that’s still not the whole problem.

Jon McCracken, who for 30 years was a Program Director for the nonprofit Bird Studies Canada, warned in 2009 that “The proverbial clock may well be ticking down on many common species of aerial insectivores.” Ornithologists agree that the reasons for fast-thinning insectivore bird populations are manifold, but McCracken believes the precipitous decline “seems to be pointing at food supply as the culprit. All these species rely on flying insects.”

Although a single mosquito in your tent is one too many, insect populations worldwide are in free-fall. In 2017 it was reported that the biomass of flying insects in German nature reserves had fallen 75% since 1990. Puerto Rican ground insect numbers are only 2 percent of what they were 30 years ago, according to a 2018 article published in the Proceedings of the National Academy of Sciences of the United States of America. And in 2019, the British Natural History Museum stated that a quarter of all insects could disappear in the next ten years.

Bluebirds, towhees, wrens, warblers, wood thrushes, white-throated sparrows, swallows, cuckoos, buntings, kingbirds and more stand to lose out as insect populations tumble. Bug zappers are not the primary culprit, of course. But they are impotent against mosquitos, undeniably increase pest populations, and contribute to the loss of insectivore songbirds. In light all this, I propose we take a lesson from Marvin the Martian and stop zapping all the wrong things. Let’s ban bug zappers.