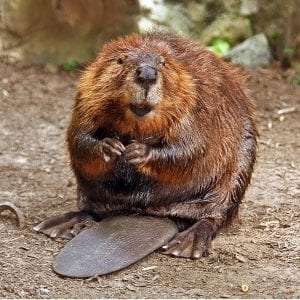 Aside from humans, perhaps no other species can modify its surroundings for its own purposes as much as beaver.

Throughout much of North America, these busy critters take down trees and dam streams to create waterways safe from predators and to lay up enough woody food stores to last the winter.

This exuberant activity is why beavers are known as “ecosystem engineers,” or species that profoundly change their environment in out-sized proportion to their numbers.

To date, ecological studies on beavers’ impacts have mostly focused on their ponds and dams, and the effects these have on forest streams, nutrient cycling, and aquatic biodiversity. But in a new study, ESF researchers have found that beaver are just as effective in modifying the forest around their ponds, and in creating diverse habitat that benefits other wildlife in addition to themselves. Conducted by Mike Mahoney as an ESF undergraduate honors project working with Dr. John Stella, the findings are published this month in the journal Forest Ecology and Management.

“Beavers have such huge effects on the environment,” said Mahoney, who is returning to ESF this fall as a Ph.D. student after a private-sector stint as a data analyst. “In addition to damming streams and flooding out low-lying areas, they also cut down the trees for the dams and food. That can wind up completely redesigning the forest around their ponds.”

Beavers, Mahoney noted, can cut down 80 percent of the trees along the edges of their ponds. However, the Adirondacks have few of the tree species that beaver typically use in other regions, so Mahoney was interested in what trees they gravitate to and the impact that has on the forest. “In other regions of North America, they tend to eat species such as aspen and willow trees. These are super fast-growing trees that need open space and light to establish,” said Mahoney. Because the Adirondacks contain mostly mature forests that grew back after widespread logging ended about 100 years ago, they lack the open space and light needed for the shade-intolerant fast-growers. “So we were interested to see what impact beavers are having in that region when they don’t have their normally preferred forage.”

Mahoney conducted his field research in summer 2018, visiting 19 different streams and lakes throughout the Adirondacks as an intern with the New York State Department of Environmental Conservation’s (DEC) Forest Health program. “We sampled pretty much the entire range,” he said, which required approximately 2,000 miles of driving and almost 300 miles of hiking to access his sites. The DEC’s Jerry Carlsen, who has worked with ESF students and faculty for years, has been an enthusiastic sponsor and booster of the project, and helped the research team with permits and logistics.

Until relatively recently, beavers had almost entirely disappeared from the continental United States after three centuries of intensive trapping by Europeans. After beaver fur and felted hats went out of style at the end of the 19th century, trapping greatly diminished and beaver populations have been allowed to rebound steadily since. Though small numbers of animals had persisted in a few places such as the deepest parts of the Adirondacks, major re-introductions from Canada after the 1940s helped them bounce back throughout the northern United States.

In other regions, disturbances such as fire, storms and forestry activities keep the forest ecologically diverse by making room for fast-growing, shade-averse trees like aspen and willow to persist. Due to a lack of disturbances — events needed to regenerate younger stands —Adirondack forests are “kind of in middle-age right now,” said Stella. ”But also, they have not yet gotten to the old-growth stage, which means there aren’t many canopy gaps where trees die and fall, and new forest patches can regenerate.”

This leaves few patches of young trees and forage for wildlife that depends on them, such as moose, migratory birds, and bats. It also concerns the DEC, which has prioritized creating a more diverse forest structure through its Young Forest Initiative, a statewide management strategy to maintain 10 percent of the public forest lands under 10 years old.

Fortunately, thousands of sharp-toothed ecosystem engineers are hard at work throughout the Adirondacks, cutting trees, creating gaps and initiating patches of young forest. Organized in colonies of four to eight individuals, beaver “are a natural source of disturbance and they’ve been on the increase for about 100 years, ever since the cessation of large scale trapping in the early 20th century,” said Stella. “Currently the state is investing resources to purposely cut and rotate its forest,” said Stella, citing the DEC’s management program, “and here we have some helpers willing to pitch in for free.”

The researchers found that, among other impacts, beaver significantly decrease canopy cover in areas where they are actively foraging and building dams. “So they’re making those patches and light gaps for those younger trees, which will create more structural diversity in these areas,” said Mahoney.

Furthermore, the team found that individual colonies repeatedly harvest these areas, creating sapling gardens that can sustain them over time. “Because beaver are continuously cutting these trees for food, they’re maintaining these younger patches,” said Mahoney, whereas bigger disturbances like fire or windstorms “knock everything down, and then it grows up together. In contrast, beaver are continuously cycling these areas.”

Most surprisingly, the research team found that in choosing which trees to cut, beaver strongly preferred a specific size range of 1-2 inches in diameter, as opposed to smaller or larger stems, and they were not particularly choosy in selecting particular species. Whereas their tree choices were heavily influenced by which species were available locally, they were much more discerning in picking stems of a size that provided the most energy gain for effort expended in cutting and hauling them back to their lodges. In studies from other regions, beaver chose different tree species, but the same consistent size range. The new study by Mahoney and Stella was unique in covering such a large geographic range across many forest types in the Northeast where these patterns could be tested.

Why are beaver so important to the health of the forest? Many researchers, including previous students in Stella’s lab at ESF, have found that these young forests support a diverse variety of plants, mammals, birds, and amphibians not found in older, more homogenous forests, which have typically larger trees but little ground cover or leafy forage within reach.

“If you’re a turkey or a moose, big trees are useless to you; you can’t get up there and there’s nowhere to hide,” said Stella. Areas disturbed by beaver, on the other hand, have a lot of underbrush and herbaceous plants, more canopy layers, and more light and water – all desirable qualities for supporting a diversity of other species.

This study is part of a larger program with Stella’s lab exploring the benefits of beavers in the Northeast. “You see this a lot when beavers create these massive wetland areas, which are all of a sudden, extremely productive – you’ve got a ton of amphibians,” said Stella, whose lab also documented that over 50 percent more bird species use disturbed beaver pond areas compared to intact forest nearby.

“They also give some water purification benefits and create dynamic wetland areas. And then when they move on and the dams eventually blow out, the wetlands evolve into rich beaver meadows with positive benefits that remain for a very long time,” Stella said. Scientists and land managers in western states have exploited these processes to partner with beaver in restoring degraded stream for better fish habitat. “And now we’ve documented here in the east that they change the structure of the forest adjacent to their ponds and that has ongoing benefits for biodiversity in this region.”

All these benefits have a potential downside in areas too close to roads and other infrastructure. Beaver in the Northeast “tend to be seen as a nuisance species because their dams will flood roads and block culverts and damage people’s septic systems,” says Stella. In these cases, beaver can be trapped and relocated where they can continue re-engineer their forest ecosystems. “Where there is room for them and where they’re not going to impact human infrastructure, there’s a tremendous amount of benefits that they offer.”