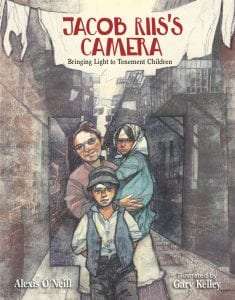 Jacob Riis was familiar with poverty. In his hometown of Ribe, Denmark, and when he immigrated to the United States in 1870, jobs for immigrants were hard to get and keep, and Jacob often found himself penniless, sleeping on the streets or in filthy homeless shelters. When Jacob became a journalist, he began to photograph overcrowded tenement buildings and their impoverished residents, using newly developed flash powder to illuminate the constantly dark rooms to expose the unacceptable conditions. His photographs inspired the people of New York to take action.

Alexis O’Neill is the author of several picture books including The Kite That Bridged Two Nations: Homan Walsh and the First Niagara Suspension Bridge, Jacob Riis’s Camera; Bringing Light to Tenement Children, and The Efficient, Inventive (Often Annoying) Melvil Dewey (Nov. 2020). Alexis received the California Reading Association’s award for making significant and outstanding contributions to reading throughout California and is an instructor for the UCLA Extension Writers’ Program. More information can be found on her website.