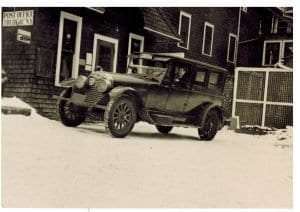 In times of trouble, some of the most essential workers are the people who deliver the mail.

Here in the Adirondacks, where there are more trees than people, it can get lonely. Mail carriers keep us connected, and post offices in rural hamlets serve as social hubs.

Post offices, like schools, were less centralized in the past. Mom and pop operations were the norm. George Henry Carley, Sr. served as the first mail carrier in Lake Clear, NY, starting in 1912. He made his deliveries by sled in winter and horse and buggy in the summertime. 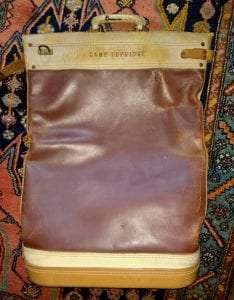 Several large institutions had their own post offices, such as the Ampersand Hotel and the Trudeau Sanatorium. The owner or head of the institution served as the nominal postmaster. Hotel employees (or TB patients at the Sanatorium) sorted and distributed the mail. Eventually, mail service was centralized in the village of Saranac Lake.

Looking for some good stories, I called up retired mail carrier Tom Clark. For some 35 years, Tom’s smile brightened the village as he speed-walked his daily route. Tom liked his downtown walking route, because he got to visit with shopkeepers and their regular customers. By moving fast in some parts of the route, he made the time to slow down and visit with his favorite longtime customers. Some of his older customers waited for him with cookies and lemonade. Their talks with Tom were often their main social contact of the day.

Mail carriers stepped in and helped with sudden emergencies. Tom remembers one day when a customer rushed out to him in a panic, with a bat loose in her house. Tom got rid of the bat and continued along his way. Tom kept a stash of biscuits in his pocket and made friends with the neighborhood dogs. Occasionally, he had to deliver the cremains of a deceased pet, sent from a veterinarian by certified mail. That was always a sad day for the owner and for Tom.

Tom joined the postal service because he recognized it as a good, steady job that would allow him to raise his family in his hometown. As a kid, he remembers seeing a mail carrier at Mark’s Bar having a beer after work in his uniform. Tom thought to himself, “that seems like a cool job.”

When he started delivering mail in the 1970s, Tom joined a crew of longtime clerks and carriers. The “old guard” were a tight-knit group who knew everyone in town. Locals remember George Booth, John Campion, Don Meachom, Nick Mitchell, Bob Nelson, Bob Oddy, Del Oldfield, Joe Quigley, Cal Reed, Charlie Sayles, Inky Schenck, Roddy Stearns, and Dick Toohey. Almost all served in the Second World War, the Korean War, or both. They came home from war to serve in the post office. After work, some drank beer together at Journey’s End and the Elk’s Club. They put money in the pot all year to save for a big holiday party. 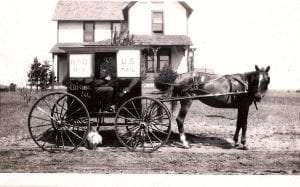 As Tom neared the end of his career, the post office began changing in ways that made it a less rewarding job. Management no longer consisted of locals who had made their way up in the ranks and there is a growing focus on automation and efficiency. Most deliveries are now made by mail truck rather than on foot. Mail carriers are monitored by GPS, and they have to meet exact times and quotas.

What’s the worth of a first class postage stamp? As the postal service reconfigured its business model, the personal relationships Tom made with his customers and colleagues were never part of the calculation.

As email, text messages, and social media replace personal letters, the post office has a different place of importance in American life. Mail carriers no longer deliver as many personal messages, but they do bring census forms, ballots, stimulus checks, medicine, and essential items. Today, mail carriers move fast all day. There’s no time for long visits over lemonade. But they know who we are, and they deserve our appreciation.