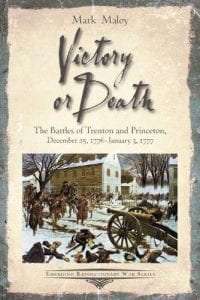 In 1776, just six months after the signing of the Declaration of Independence, George Washington and the new American Army were on the verge of utter destruction at the banks of the Delaware River.  The American Revolution was imperil.

Rather than submit to defeat, Washington and his small band of soldiers crossed the ice-choked river and attacked the Hessian garrison at Trenton, New Jersey on the day after Christmas in 1777.

The surprise attack was followed by successful actions along the Assunpink Creek and at Princeton.

In a virtual lecture on battles of Trenton and Princeton (December 25 – January 3, 1777), presenter Mark Maloy will discuss the stunning military campaign that allowed Washington to turn the tables, and breathe life into the dying cause for liberty during the American Revolutionary War.

Mark Maloy is the author of  Victory or Death: The Battles of Trenton and Princeton, December 25 – January 3, 1777 (Savas Beatie, 2018). He holds an undergraduate degree in History from the College of William and Mary and a graduate degree in History from George Mason University. When not working he is an avid Civil War and Revolutionary War reenactor and living historian and is a regular contributor to the blog Emerging Revolutionary War.

Pre-registration is required before noon on Thursday, August 6th.

For more information or to register, visit the Fraunces Tavern Museum website or email 2education@frauncestavernmuseum.org.

If you found this post helpful, make a contribution at our Rally.org fundraising page.