By the time Frederick and Anna met in the 1830s in Baltimore, his owner valued him as a slave who was a skilled caulker. Yet Anna, despite being a free woman skilled as a domestic and cook, was not well paid by her white employers. 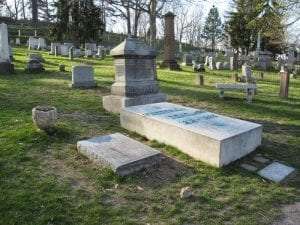 With Anna’s help, Frederick made a harrowing escape to New York City.  There they married before moving to Massachusetts and taking the name Douglass. Discrimination kept Frederick Douglass from practicing his trade, so he did more menial work while Anna worked as a domestic outside the home and took in piecework.

At great risk to themselves, they welcomed runaways to their homes in new Bedford and Lynn, Mass., where their first four children, Rosetta, Lewis, Charles and Frederick Jr., were born. Frederick became a public speaker for the anti-slavery society and it took years before his speeches, books and pamphlets made a profit. Anna and the children lived frugally and took in family, abolitionists, and renters to make ends meet. Frederick started the North Star newspaper in Rochester in 1847, and the family joined him in 1848. Their fifth child, Annie, was born in Rochester and Frederick and Anna raised their children to be models of good behavior. 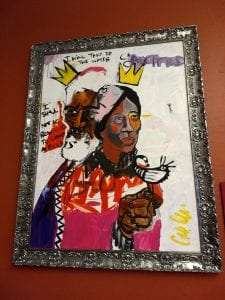 Frederick could not have fulfilled his genius as an orator without the larger abolitionist network, nor Anna’s constant support. But life is never simple. Many abolitionist activists did not believe in voting. It horrified abolitionists in Rochester and Boston when Frederick decided that voting was, in fact, essential.

Anna was very private and would never have disagreed with Frederick’s opinions in public, but she had a mind of her own which she expressed freely at home. On one occasion in the early 1850s, irate abolitionists aimed to discredit Frederick by printing Anna’s disagreement with him over his working with a white woman who also rented with them. This mention of their home life in print was scandalous, but seems to be the only time that ever happened.

Douglass was the only African American at the Seneca Falls Convention, but there’s no way to know how his disagreements with Susan B. Anthony and Elizabeth Cady Stanton over black men getting the right to vote in 1870, long before women in 1920, played out at home.

Meanwhile, her decades of work on the Underground Railroad and the stress of Frederick’s travels, strained her health. Over the years, Anna’s place as a meticulous homemaker, family bookkeeper and safety net for extended family changed, and family began to care for her. Anna died shortly after she suffered a stroke in July 1882, in their beautiful home at Cedar Hill in Washington, D.C. 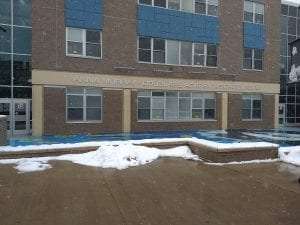 Anna was buried in D.C. in Graceland Cemetery, but in 1898, her family re-interred her remains near Frederick’s, in Mount Hope Cemetery in Rochester. In 2018, the Rochester City School District honored her by renaming #12 School at 999 South Ave., the site of the Douglass Rochester home for 20 years, Anna Murray-Douglass Academy.

This competent, hard-working woman, a most important ally of Frederick Douglass, finally got public recognition for her many contributions.

Photos: Anna Murray-Douglass, ca. 1860 first published in Rosetta Douglass Sprague, My Mother As I Recall Her (1900); Douglass Family gravestones at Mount hope Cemetery in Rochester, NY; “One Hundred Miles Straight North” by Cordell Cordaro, on display at the downtown Rochester Public Library in 2020; and the Anna-Murray Douglass Academy in Rochester.