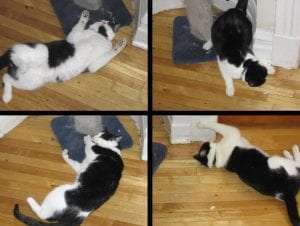 We humans take pride in our unique – some would say exalted – place in the animal kingdom. Language, a complex social structure, and an unparalleled ability to manipulate our environment are among the things which set us apart from other species. We are the only animal which can point to triumphs like space travel, organ transplants, nerve gas, for-profit prisons, and plastic-filled oceans.

Until fairly recent times, we also believed that we stood alone in our proclivity to addle our brains with alcohol and drugs. Alas, we can no longer claim that distinction. It seems that dolphins, dogs, wallabies, waxwings, and loads of other animals enjoy getting loaded, too.

Tales of drunken monkeys, plastered pachyderms, and caffeinated goats have circulated for hundreds of years, though it took a while before anyone got around to investigating these claims. It turns out that many such stories are true. We’ll start with booze, which animals can get a hold of at the nearest pub. And anywhere that ripe fruit and sunshine are available.

If you watched Pirates of the Caribbean, you know they were required to carry stuff like sails, ropes, cannons, and either a parrot or a monkey. The sad truth is that the vervet monkeys which inhabit St. Kitts, Barbados and a couple of other Caribbean islands arrived on slave ships. YouTube abounds with videos of these primates pinching cocktails from patrons of beachfront bars and becoming uproariously drunk. Interestingly, monkeys drink like we do.

In a 1999 McGill University study, researchers gave 1,000 captive monkeys free access to alcohol mixed either with juice or water. They found that roughly 15% drank very little, while 15% were “social drinkers” who imbibed cocktails only with their peers. Another 15% were heavy drinkers, choosing alcohol without fruit juice. This clique was fully functional in the larger group, however, and tended to be dominant. And, similar to the human population, about five percent (mostly young males) drank themselves into a stupor.

Closer to home, North American songbirds sometimes get grounded when they eat too much fermented fruit. This can easily happen in the spring when migrant birds gorge on crabapples which have overwintered, or arrowwood, winterberry, and other native berries still clinging to branches. Cedar waxwings, which feed largely on fruit, are especially vulnerable to intoxication or even fatal alcohol poisoning. Certainly some of this is accidental, but birds have been observed breaking the skin on fruit, thus exposing the juices to airborne yeast spores, and returning 24-48 hours later to selectively eat the fizzy fruit.

But there are plenty of naturally occurring drugs out there besides alcohol for animals to choose from. Madagascar red-fronted lemurs chew on giant millipedes which secrete toxic benzoquinone, a natural insect repellant the lemurs rub over their bodies. They continue harvesting benzoquinone, which also happens to be psychoactive, until they are utterly stoned. Obviously they don’t do this all the time or they would have long ago died out. Also a popular animal video topic on YouTube.

Catnip, which grows worldwide, is perhaps the best-known pet drug. About a third of all cats are genetically immune to its effects, though, so some cats get left out of the fun. This might explain why South American jaguars have been documented chewing on the roots of the yage vine (Banisteriopsis caapi), a powerful hallucinogen. Banisteriopsis caapi is used by native peoples to induce visions as part of religious ceremonies. You have to wonder what jaguars hallucinate about.

Other pets take a little nip of something now and again, too. Dogs are known to sometimes lick or even suck on toads, which release a toxin that stupefies the pooches.

Down Under, where nearly half of the world’s medical opium is grown, they’ve had problems with security. But not the typical kind. On the Australian island of Tasmania, the Attorney General had to make an unusual report in 2009 to a Parliamentary committee on opium security. “We have a problem,” she testified, “with wallabies entering poppy fields, getting as high as a kite and going around in circles.” Evidently, the wallabies would trample a little “crop circle” before passing out. And here we were thinking it was aliens the whole time.

Speaking of down under, marine life can be a blast as well. We don’t know if pufferfish get high, but when threatened, they swell up and release a powerful neurotoxin. In very small doses, it apparently has narcotic effects. Dolphins have been filmed on a number of occasions sharing an inflated pufferfish, each one having a taste, or puff, before passing it down the line. By the time they let the pufferfish go, the dolphins are deeply intoxicated. There is a great BBC documentary on this phenomenon.

And finally, the mystery of Santa and his flying reindeer has been explained. Reindeer, which in North America are called caribou, seek out the fly agaric mushroom Amanita muscaria. This is the cute red-capped toadstool with white polka dots so often used by elves, gnomes, and other such folk as a place to sit. Amanita muscaria is a potent hallucinogen used by Siberian shamans for millennia. No wonder Santa’s reindeer can circumnavigate the globe in a single night.

Just because something is naturally occurring doesn’t mean it’s safe – poison ivy, giant hogweed, and water-hemlock are natural too. And plenty of birds, monkeys and other animals die as a result of their intoxication. Please drink or puff (or chew millipedes) responsibly.