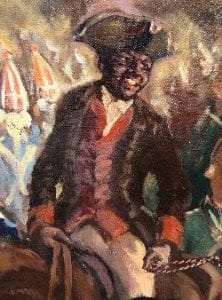 The Fraunces Tavern Museum has announced an illustrated virtual talk, The Black Presence at the Battle of Bennington, presented by Phil Holland, set for Thursday, August 20th.

The talk will begin at 6:30 pm and will explore the contributions of African Americans at this critical victory of the American Revolution, from the African-American soldier who died in battle as a member of Col. Seth Warner’s regiment of Green Mountain Boys, to the sources of wealth that funded the New Hampshire troops at the battle.

This lecture will take place using Zoom. For more information or to register, visit the Fraunces Tavern Museum website.

Illustration: An African American in the painting “Prisoners at the Battle of Bennington, August 16, 1777,” by Leroy Williams (1878-1965) courtesy Bennington Museum.