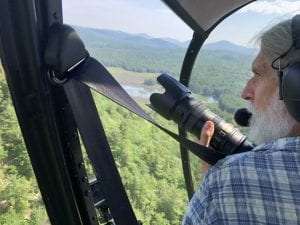 The award is given annually to recognize exemplary individuals and organizations for their conservation efforts around Lake George.

The award is typically presented during the LGLC’s annual President’s Reception, but because of the pandemic the event has been cancelled for this year. The physical award will instead be presented in person during next year’s Reception.

The Rowan Award is named after Henry M. Rowan, who received the inaugural award in 2003. Recipients have made significant impacts in the LGLC’s own efforts as well as other environmental projects aimed to protect the beloved natural and cultural resource that is Lake George.

Carl Heilman II is an internationally published photographer and author. He has been photographing the Adirondacks since the mid 1970’s, working to capture the grandeur, and his emotional and spiritual connection to these special locations in each of his photographs. His work has been published in numerous regional and international publications including National Geographic Explorer, Outdoor Photographer, Shutterbug, the New York Times, Nature Conservancy publications, Adirondack Life, the Adirondack Explorer, and the Conservationist.

Heilman leads a variety of one day and multi-day photography and Photoshop workshops and tours each year in the Adirondack Park, Acadia National Park and other unique landscapes around the country. His AV programs have aired on regional PBS stations, and are shown regularly in regional nature centers. He was the featured photographer in the May 2008 national PBS special The Adirondacks.

Carl’s coffee table books include, The Adirondacks: Season by Season, The Coast of Maine, The Adirondacks, Adirondacks: Views of An American Wilderness, and The Great Smoky Mountains, Blue Ridge Parkway, and Shenandoah National Park by Rizzoli; Lake George by North Country Books; three NY State books by Voyageur Press; plus his latest book, The Trails of the Adirondacks, a joint publication with Rizzoli and the Adirondack Mountain Club.

Information on Carl’s photography workshops, fine art prints, calendars, books, and puzzles can be found on his website.

More information can be found on the Lake George Land Conservancy website.