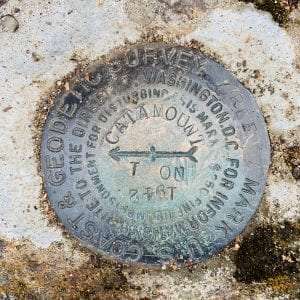 On many hikes, I never truly feel like I have reached the summit of a peak until I’ve found a tiny metal disc set into the rock.

These small plates of metal are called survey markers, or benchmarks, and they are put in place by surveyors to mark important points on the Earth’s surface.

A mountain summit is a great location to place a marker as it allows a surveyor to have a panoramic view of the land around them and thus serves as a great reference point. You can learn a lot about where you are by spending a few minutes examining these small disks. Common information found on survey markers includes the name of the place, who installed the marker, when it was installed, and the elevation. These markers once played an important role locally and nationally, as they laid the groundwork for creating accurate maps we depend upon today. 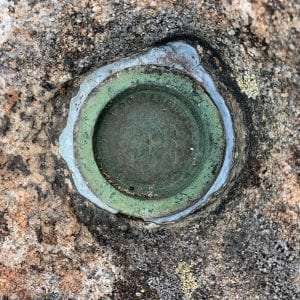 During his travels, Colvin witnessed many of the threats facing the region. His love for the land and appreciation that the Adirondacks could be destroyed without protection led him to become an early advocate for the Adirondack Park. He lobbied for the funds to survey the region.

Photos, from above: Catamount Survey Marker; and one of Colvin’s original markers.