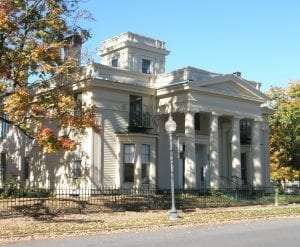 The Saratoga Springs Preservation Foundation (SSPF) has announced this week’s Summer Sunday Stroll is Wealth & Wellness: Franklin Square. The tour is being led by NYS Assemblywoman and former SSPF Executive Director, Carrie Woerner on Sunday, July 5th at 10:30 am, with a second tour at 1 pm.

Historic Franklin Square in Saratoga Springs is a veritable showcase of American architectural history and home to some of the oldest private residences in the city. This tour meets at the northwest corner of Division Street and Broadway.

All tours last approximately 90 minutes and require walking and standing on varied terrain. Due to current restrictions in New York State, Summer Strolls will be limited to twenty guests, which is less than the maximum of 25 that is currently allowed, and tickets must be purchased in advance until otherwise noted. Everyone will be required to wear a mask and social distancing will be encouraged when possible. The cost per tour is $15 for SSPF members and $20 for non-members. Members who have received complimentary Stroll passes will have those honored for their value of $10 and will be required to pay the difference of $5.

The next Summer Sunday Stroll – Broadway in 1874 – is set for Sunday, July 12th at 10:30 am. Gloria May will highlight the sights and sounds of Broadway in 1874, a year of sophistication and excitement as that was the only season that all four of the grand hotels existed at one time – the Congress, Grand Central, Grand Union, and United States Hotels. Walk back in time to discover what has changed and what has remained the same in the historic downtown. This tour is limited to twelve guests.

In addition to the Summer Sunday Strolls, the Foundation will be offering bike tours of the Saratoga Spa State Park on Saturday, July 11th & August 22nd and Sunday, September 27th. The cost per tour is $20 for SSPF members and $25 for non-members. Bike tours last approximately three hours and space is limited.