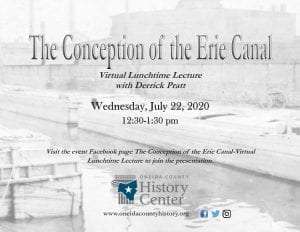 Completed in 1825 to create a navigable water route between the Atlantic Ocean at city of New York and the Great Lakes, the Canal was the second longest in the world and greatly enhanced the development and economy of the United States. But while the Erie Canal took only eight years to dig, it was a nearly 100-year long process to get started, often mocked by those who thought it impossible or unnecessary.

Derrick Pratt is the Museum Educator at the Erie Canal Museum in Syracuse. A native of Chittenango, NY, he received a degree in Social Studies Education from SUNY Cortland and is presently pursuing a masters in Museum Studies from Syracuse University. Prior to his job at the Erie Canal Museum he served as Director of Programs at Chittenango Landing Canal Boat Museum for three years.

To view the stream or for more information, visit The Conception of the Erie Canal Facebook page, or visit the Oneida County History Center website.