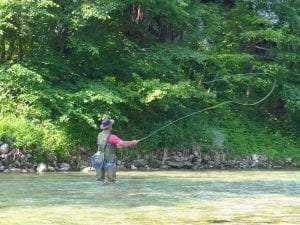 Trout fishing is a challenging endeavor, yet it can be the most rewarding backcountry activity, as success ordinarily means a meal or two with a great tasting main course. Because trout require cool, clean waters in which to live, anglers who want to engage in this popular summer pastime traditionally head to those places where conditions remain favorable for these hardy game fish.

Larger tributaries that flow at higher elevations, streams that run down the north slope of a mountain, shady, gravel-bottom stretches of water that frequently undercut their banks and deep holes that lie on the edge of an eddy are all places in which trout can still be caught during July and August.

Unlike bass and other types of sunfish, trout strongly prefer waters that are in the low to mid-50s. This is the thermal environment in which a trout’s body is best suited to absorb dissolved oxygen from the water, metabolize food and carry out other life processes. As the water warms beyond the mid-60s, as it has now, the ability of trout to acquire enough oxygen from the water to meet their needs greatly decreases. This triggers respiratory stress in these fish, and if the water continues to warm trout will begin to die from a lack of oxygen.

The amount of oxygen that water is able to hold varies and is a function of its temperature. As the temperature of this fluid increases, it loses the ability to have much oxygen gas dissolve within it. This causes serious issues for the non-green organisms that reside in the water. Fish and other aquatic animals that require a relatively high concentration of dissolved oxygen have adapted for an existence in colder settings which contains more of this gas.

The exact temperature at which trout begin to die from thermal suffocation varies depending on the setting and the manner in which oxygen is being added to the water. In quiet lakes and ponds, the photosynthetic action of green microorganisms and plants is the primary means in which oxygen is placed into the water. Wave action at the surface also introduces some air into the water, however this dissolved gas tends to remain in the upper layer and does not get the opportunity to mix into the bottom where trout go in summer in their attempt to locate more thermally favorable surroundings.

In fast flowing streams and brooks, the water swirls around boulders and cascades over rocks and logs allowing air bubbles to regularly mix with the water. Turbulence in the stream keeps a substantial amount of these tiny clusters of air suspended underwater, which greatly augments the infusion of oxygen into the water. Despite temperatures that may rise into the low and mid 70’s, trout are still able to extract enough oxygen from these waters to remain alive and active.

During times of limited rainfall, as we have been experiencing, when the volume of water in a stream is low, the amount of air that bubbles into the water also decreases, which can diminish the concentration of dissolved oxygen. As trout lose the ability to acquire adequate oxygen, they become increasingly more lethargic. This reduces their need for this gas, as they metabolize food at a much slower rate. Fishing during these occasions can be frustrating and is not recommended, as the fish are just not interested in eating if they cannot “breathe” properly.

During periods of low water, trout are forced to congregate into places in the stream where the current is minimal and there is protection from the warming effect of the sun. Deep holes in shady spots are regularly sought out by trout as well as small pockets that form under a bank in a bend of a stream. Places where a small stream enters a main waterway may also attract some individuals as this type of settings may provide an inflow of cooler water with a higher oxygen content.

The exceptionally dry conditions that have developed this summer have been quite hard on many forms of wildlife, including various species of fish. As water levels drop and temperatures continue to increase, life becomes more of a challenge for all cold water organisms, especially trout. Even trout that are caught and quickly released have a much lower chance of survival under the current conditions as these fish quickly exhaust all of their oxygen reserves when fighting on a hook. Upon being released into the stream, many are unable to recover from their oxygen depleting ordeal and eventually die. Hopefully, the levels in our streams will rise and the temperatures will cool, allowing for a healthier environment for trout here in New York State.