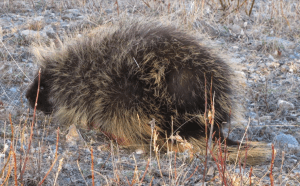 North American porcupines are large rodents whose ancestors apparently crossed from Africa to South America on floating trees and logs some 30 million years ago. Their most prominent feature are the approximately 30,000 quills which grow individually everywhere out of the skin musculature, interspersed with bristles, under fur and hair.

The quills help the porcupine defend themselves from attacks by predators. The only quill free areas are the face and underside.

The word porcupine comes from the old french word porcespin, which roughly translates as thorn pig. There are 58 species of new and old world porcupines, distributed over two different families. Our North American version may reach 2 1/2 feet in length, with their rotund bodies weighing up to 40 lbs, making them second to the beaver as the largest rodent in North America.

Porcupines prefer coniferous and deciduous forests with food-rich understories and can live into their late twenties. They do not hibernate, but may share wintering quarters with other porcupines, in caves, covered depressions, hollowed out logs and trees, and similar places.

Porcupines are mostly nocturnal herbivores, eating mainly greens like herbs, clover and skunk cabbage during the growing months, while spending much of their time in trees in winter, eating tree bark and evergreen needles, while getting minerals by chewing on antler sheds.

Like many mammals, they need sodium, and may be attracted to anything which has been coated with human sweat, from wood handled tools and paddles to outhouse toilet seats (our urine has a high sodium content). They’re also attracted to the sodium components found in some building materials, such as plywood.

Porcupine generally mate in late Summer, and their rituals are as strange as the porcupine’s general appearance. Females are only sexually receptive from eight to twelve hours, once a year, making foreplay and competition among males an urgent process indeed! The male does a rather ornate dance, which includes vocalizations and spraying urine over the head of the female.

Seven months later, in early Spring, mom gives birth to a single baby, whose quills are thankfully soft as they emerge from the womb, hardening within hours. Within a few days the young one is already foraging and will stay with their mother’s for about six months. Porcupines have a wide vocal range, which includes grunts, shrieks, wails, coughs and tooth clicking. 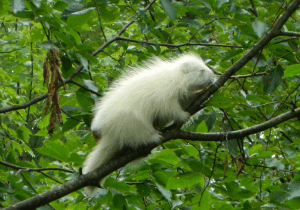 Porcupines have claws well suited for climbing, and their hollow quills enable efficient swimming. The quills themselves are principally modified hair, coated with keratin, a fibrous structural protein which is a main component of hair, fingernails, claws and horns. The quills come in a variety of length, thickness and patterns, with the longest being on the rump, with the business end of the hollow shaft featuring a sealed barbed terminus, making the quills very hard to remove, when the air tight quills are warmed by the sun, as well as the skin of the unfortunate recipient.

Porcupines are attracted to buds on tree branches and stems which may not handle their weight, so falling out of trees is a common porcupine fate. Fortunately, their skin contains antibiotics, useful in the event the porcupine quills itself, by falling out of a tree, or when males fight during the mating season.

Porcupines seem to prefer disengagement to fighting, and employ both audible and visual cues to warn off would be predators. These include teeth clattering, turning its back to display the quilled tail, which may be lashed at the attacker, arching the back to make the quills stand up, and shivering to cause the quills to rattle and wave menacingly. As with actual contact with the attacker, the latter activity may cause some quills to shake loose and fall, which may be behind the popular folklore that porcupines can shoot their quills. They can’t.

Like possums, porcupines can emit a really offensive odor when frightened or agitated, in their case, from skin glands called rosette on the lower back.

While porcupines are obviously very risky targets for predators, cougars are known to knock a porcupine out of the tree, they are known to be taken by great horned owls and eagles, and painfully by bears, wolves and coyotes. The porcupine’s main enemy is the fisher, whose numbers continue to grow in much of New York State, as porcupines increase their own numbers and range.

Fishers kill porcupines by delivering fast and repeated bites to the face, on the ground or in a tree (which may knock the porcupine out of the tree). They may then flip a terribly weakened or injured porcupine, to reach the vulnerable, unquilled underside.