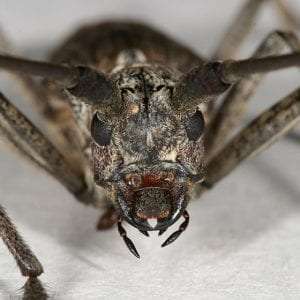 From the afternoon into the early evening in mid to late summer, a silence often develops as the heat of the day peaks and then starts to cool; as birds cease to sing and amphibians lose their urge to call.

In the stillness between periods when leaves rustle from light summer breezes, the sound of a grinding or twisting-scraping can be heard coming from a fallen softwood log or a dead standing evergreen.

This low volume creaking noise is particularly evident in downed white pine trunks that lie in open and semi-open settings. It is caused by the wood boring activity of the larvae of the Northeastern pine sawyer beetle (Monochamus notatus), a large, grotesque looking bug that is widespread across the state.

The Northeastern pine sawyer is the largest species of long-horned beetle in our region; the adult may approach two inches in length. This is greater than other common types of similar beetles, like the white-spotted sawyer and the Asian long-horned beetle, which has become a serious pest to hardwood trees. Both of these other beetles average an inch to an inch and a quarter in length. Aside from its size, the adult Northeastern pine sawyer is also distinguished from other long-horned beetles by its drab gray color. Most other species are considerably darker and have other distinguishing markings on their back.

As is the case with other members of this group of insects, the pine sawyer beetle has an exceptionally long set of antennae. The noticeably jointed “feelers” of the male Northeastern pine sawyer can exceed three inches, which is almost twice its body length, and those of the female are similarly hard to overlook as they are close to the length of her body.

After mating, the female searches for a pine, spruce or fir tree that is dying or has recently fallen to the ground in which to place her eggs. Trees that grow near some type of open setting, such as along the shore of a lake, near the edge of a highway, golf course fairway, or power line are strongly preferred as the larvae that eventually hatch, quickly enter the wood and function better if their surroundings are warmed during the day by the sun. Pine trees that grow on steep, south-facing slopes are also used by the Northeastern pine sawyer since conditions inside their trunks become suitable as the sun regularly bakes them.

The oversized set of mandibles or jaws of the larva enables it to cut away small fragments of wood creating an opening into the fallen trunk that measures just over a quarter inch in diameter. By repeatedly shaving narrow fibers from the log directly in front of it, the large white grub is able to construct a tunnel several inches deep into the wood. Tiny, elongated stripes of wood are eliminated from the entrance and eventually fall to the ground forming a small, yet noticeable pile of woody debris that is evidence of its presence and recent activity. A single fallen pine tree in an open setting typically has numerous individuals residing within, as the female will lay many eggs when an ideal opportunity arises, which can be seen by the many small piles of woody residue below the log.

As it chews, the larva is able to extract nutrients from the layers of inner bark, the cambium and then the sapwood of various conifers. Because the trees into which it bores are either already dead, or are well along in the process of dying, the Northeastern pine sawyer is not considered to be a forest pest. However, for loggers that have left the trunks of numerous white pines in an open staging area for more than a month during summer, the wood boring actions of this beetle can reduce the value of any wood destined for a lumber mill.

Adult Northeastern pine sawyers are known to feed on the needles of various evergreens, however the relatively small amount of foliage which they consume apparently does not negatively impact the tree.

Because it resides within a protective wooden chamber, the larva has few natural enemies. Woodpeckers are occasionally willing to chisel out an individual that is still close to the surface of the trunk, however, the deeper the grub penetrates the wood, the less likely a woodpecker is to expend the energy needed to extract one of these bugs, despite its large size.

As summer begins to wane, fewer noises can be noticed, especially during the day. One sound that is unmistakable when heard is the soft, creaking-grind that comes from inside a pine log. This is the Northeastern pine sawyer which is chewing its way into a spot where it will pass the winter undisturbed.