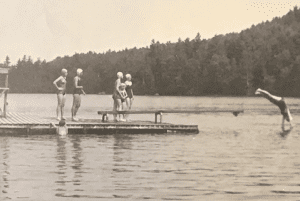 One of the popular parts of the Chester Challenge in the Southeastern Adirondacks is the hike around Palmer Pond. The pond is located west of Chestertown, Warren County, about a mile from the Hudson River at the end of a dirt road called, oddly enough, Palmer Pond Road.

At the parking lot and trail gate there is a sign-in kiosk with a map of the trails. The trail begins on an old road, which also provides motor vehicle access for use by people of all abilities (with a permit).

As one hikes the gently undulating roadway and crosses the outlet through a beaver meadow, the pond comes into view. The trail continues through an area that was many years ago heavily logged, to a small clearing with a picnic table. Here a short track leads down to Palmer Pond.

There is a very pronounced stone wall along the upper part of this trail before descending to the pond. The wall is testimony of much sweat and many hours of farm labor to clear what was once fields and pasture. As one hikes along the stone wall, one cannot but think of Robert Frost and his poem “Mending Wall.”

If you are attuned to reading a reforested landscape, the clearing looks odd. It’s small.  If you strip away the younger trees in your mind’s eye, there appears to be something unnatural.  In the woods a short distance behind the picnic table, there are the remains of an old building containing a large metal tank. What could this have been? 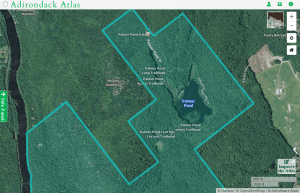 A few yards away, on the trail toward the pond, there is evidence of an old pathway or trail that goes straight to the pond. Following this overgrown path one comes upon the remains of a wooden structure collapsed by decay and fallen trees. What was this? There are four decaying and collapsed structures around the area of the clearing. 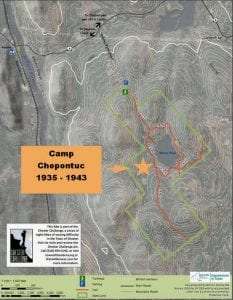 This was the site of Camp Chepontuc, a former Girl Scout Camp in the 1930s and early 1940s.

In April of 1935 the Glens Falls Council of the Girl Scouts purchased the land for the camp from James S. Kiley. The Scout’s prior camping facility near Bolton Landing had become too small. At the time, the property had been logged in the past and more recently farmed. But for the Girl Scouts, the isolated 200-acre mix of cleared and forested lands, the 35-acre pond, and it’s relative proximity to Glens Falls (about 30 miles away), made for an ideal summer camp location.

A campaign to raise the purchase price of $9,500 was undertaken, and development began in winter and spring of 1934-35. In May, 1935 Elizabeth Imrie camp life in the Glens Falls The Post Star: 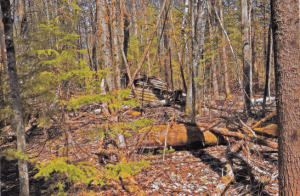 “The activities of the camp have been planned to cover and fill a number of individual interests, while at the same time they develop in the campers self-reliance, endurance, familiarity with nature, and an ability to get along with a group of people. On the program appear hiking, pioneering, which will take in exploration and tracking of the new property, mountain climbing on which [was] a popular innovation in camp last year. A great deal will be done with water sports, canoeing, and sailing; new and interesting craft work, dramatics, and nature study are also on the program.”

By the summer of 1940 the camp had grown to include a well developed waterfront (including docks, and a raft with diving board), a Main Lodge, a nurses cabin, storage buildings with an ice house for refrigeration (with ice harvested from the pond) and four age-appropriate camping sites (Snug Harbor, Pooh-Corners, Birch-Wood, and Deep-Woods), each with tent platforms and latrines/wash-houses.

There was no camp telephone. A local boy took messages to the camp on his bicycle and he was required to blow a whistle as he approached the camp to warn the girls of his arrival. 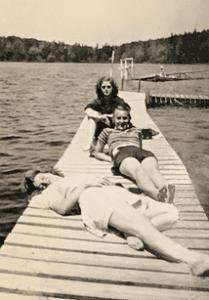 Former camper Joan Brazier recalled: “Another clear, very clear, memory is those awful leeches. I’m thinking of a bit of delayed pride in even going into the pond; I wouldn’t do now – I remember four salt buckets, one for each group, in competition for the largest number for the week. I wasn’t a contributor, I recall that, too. As memories often do, imagining them now they seemed as big as fish and probably slimier than they really were.”

The camp was designed to accommodate 40 to 45 girls with a staff of 12 to 14. There was one man assigned to the staff to drive the station wagon, pick-up supplies, pickup and deliver the mail, carry heavy equipment, and transport the campers and staff to offsite activities. Each year there were three, two week, sessions with girls in all age groups. The name of the camp is derived from a Haudenosaune (Iroquois) description of the area around the rocky, steep waterfalls at Glens Falls on the Hudson River (“a difficult place to get around”).

The KampKrier of July 1936, described the typical camp activities as “camping on the mountains or down by the Hudson River, hiking over to Friends Lake along an old logging road, Climbing Mt Marcy and Crane Mountain, plenty of swimming, and the traditional evening camp fires.”

Fire struck the Camp Chepontuc in July 1943 destroying the Main Lodge and causing severe damage to the nurse’s station. One of the campers recounted the event:  “My clearest memory is the night the [recreation] building burned. I say ‘night’, but I am not really certain it was nighttime, or if that’s just the way I’m remembering it. I recall passing filled water buckets along a line of campers.” (Other reports have the fire occurring during the day while all of the girls and staff were swimming at the waterfront.)

The 1943 summer season was the last for the camp. The closure had a lot to do with the fire, and probably also the ongoing war in Europe and the Pacific. Gas rationing became part of the war effort in 1943. Glens Falls Girl Scout Council built another camp in Queensbury near the present office, Camp Meadowbrook. This new camp was within bicycling distance of many of the girls’ homes.

There is not much of Camp Chenpontuc left after nearly 80 years. The property was sold in 1948 to a private group from Saratoga, and then again in 1962 to the State of New York. Palmer Pond is now in the Lake George Wild Forest, part of the “forever wild” Adirondack Forest Preserve that makes up much of the Adirondack Park.

(Near the pond are two accessible camping sites and an accessible water access. A Motorized Access Permit for People with Disabilities (MAPPWD) can be obtained at the DEC office in nearby Warrensburg).

Thanks to neighbors, local historians, DEC Forest Rangers, the Girls Scout Chapter in Glens Falls, and former campers who provided sources and stories about the former camp.