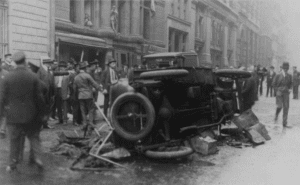 In the course of the nineteenth century, powerful and relatively stable explosives were developed. Dynamite became synonymous with radicalism and the moniker “dynamitist” preceded that of terrorist.

On September 16, 1920, a bomb was set off on a busy corner of Manhattan’s financial district. At 12:01 pm, a horse-drawn wagon concealing 100 pounds of dynamite was detonated. The blast killed thirty-eight people.

Following the passage of Bismarck’s Anti-Socialist Laws (1878-1888) many political refugees settled in London. Among them were several anarchists who met at the Rose Street Club, just off Charing Cross Road.

Founded in 1877, the club was a meeting point for politically displaced persons and became home to international anarchism. It offered a platform to radical speakers and turned itself into a publishing house under the leadership of Bavarian-born journalist Johann Most. In 1879 he began editing Die Freiheit (“Freedom”), a newspaper that was distributed all over Europe.

The ominous slogan “propaganda of the deed” is associated with Most’s inflammatory thinking. It implied that violence is a legitimate means to achieve political ends. After he had published an article justifying the assassination of Tsar Alexander II in 1881, Most was arrested and sent to prison. Released in 1882, he sailed to America and settled in Chicago where he continued to publish Die Freiheit. Most was one of a number of German anarchists who had moved on from London to the United States.

The pulling power of America was not restricted to economic migrants. In the early history of radicalism and its repression, the New World was considered a “substitute” solution by many uprooted Europeans. Italians activists in particular were attracted by America as an alternative choice.

Giovanni Passanante’s failed attempt to kill King Umberto I in Naples on November 17, 1878 led to a ferocious quelling of radical movements. The policies of ammonizione (restriction of movement) and domicilio coatto (internal exile) were imposed by the government of Francesco Crispi (later labelled the “Mussolini of his time”). Arrests were made indiscriminately, victims had no legal right to defend themselves, and were treated ruthlessly. Those under suspicion fled abroad, setting in motion an exodus of political refugees.

In June 1894, French President Sadi Carnot was stabbed to death in Lyon by Sante Geronimo Caserio, a native of Lombardy. A crackdown on exiled Italian radicals ensued in France and Switzerland. 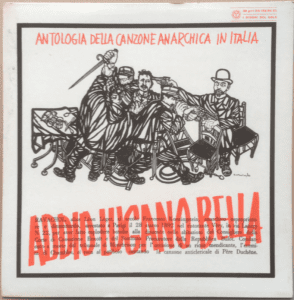 Among those rounded up and arrested in Lugano was Pietro Gori. During his brief imprisonment before expulsion, he wrote the words (the music is anonymous and of popular origin) to the song “Addio Lugano Bella” which became the anthem of anarchism.

Fear of political agitation swept Europe and led to a tightening of laws on asylum. For a while, London remained a safe haven from persecution. That changed on Thursday, February 15, 1894 when Martial Bourdin entered Greenwich Park. Carrying a parcel under his arm, he walked towards the Royal Observatory.

The bomb exploded prematurely, killing the French anarchist. Bourdin’s attempt caused intense concern. Newspapers queried the wisdom of granting refuge to foreign radicals and demanded a change in policy. Public pressure eventually led to the 1905 Aliens Act that ended the more liberal policy towards asylum seekers. Anarchists made their way to America instead.

Luigi Galleani was a victim of Italy’s harsh regime. He had become an anarchist whilst studying law at the University of Turin. Convicted of conspiracy in 1894, he spent more than five years of internal exile on Pantelleria, a volcanic island in the Strait of Sicily. He managed to escape to Egypt and traveled via London to the United States, arriving in Paterson, New Jersey, in late 1901.

A powerful speaker, Galleani stirred a strike of economically deprived silk workers (many of them immigrants) in mid-1902. Accused of inciting a riot, he fled to Canada. Having returned to America under the assumed name of Luigi Pimpino, he moved to the granite city of Barre, Vermont. From the 1880s onwards a large number of Italian quarry workers had settled there. He soon established a movement of radicalized followers.

In June 1903, Luigi launched the Cronaca sovversiva (“Subversive chronicle”), a newspaper that was remarkably well illustrated. Most artwork was produced by the anarchist printmaker Carlo Abate. With woodcuts and line drawings, he reacted against the mechanized means of photography, bringing effort and emotion into his work to which readers could respond. Even within a culture of dissent, the ideas of the Arts and Crafts Movement resonated. 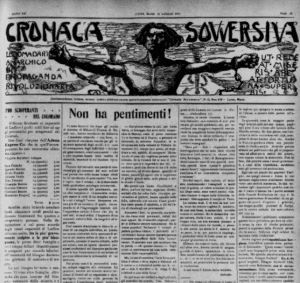 Rejecting all forms of political organization, Galleani declared government a menace to the individual and argued that even labor movements would eventually become corrupt. Calling for decisive action, he advocated the overthrow of capitalism and the elimination of oppressors by violent means. He applauded Tuscan-born anarchist Gaetano Bresci who had left Paterson for Monza to assassinate King Umberto I on July 29, 1900.

In 1905, the newspaper advertised Galleani’s La salute e in voi (“Salvation is within you”), a bomb-making manual to the benefit of those wanting to further the cause of subversion. Beginning in 1914, his followers (known as Galleanisti), began to put their leader’s instructions to the test. Bombings were plotted in New York and Boston to protest America’s entry into the First World War.

In 1918, the offices of the Cronaca were raided and its editors arrested. A parcel bomb delivered to the door of Attorney General Alexander Mitchell Palmer was attributed to the group as an act of revenge. It prompted the Department of Justice to carry out the Palmer Raids (in which J. Edgar Hoover took part) with the sole aim of convicting their political opponents. Luigi Galleani was deported to Italy in June 1919. A summer of social unrest followed. 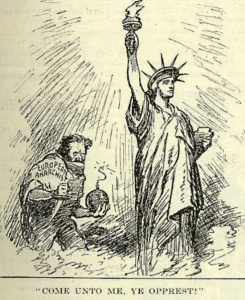 September 16, 1920, twelve noon, and lunchtime rush was about to start in Wall Street. As he stopped a loaded cart in front of the Assay Office, a nondescript man got off and hastily disappeared in the crowd. Shortly after, the wain exploded into a hail of shrapnel, creating carnage.

Thirty people died at the spot; others could not be saved after medical help. Some three hundred people were injured. The next morning the damage was cleared, broken windows covered, and Wall Street was back in business.

Finding those responsible for the outrage proved difficult. New York Police, the Bureau of Investigation, and the Secret Service ran their own investigations without finding significant clues. The NYPD was able to reconstruct the bomb and its fuse mechanism, but all the components were commonly available.

Since 1914, the number of terrorist attacks in American cities had increased. The Wall Street bombing sparked renewed efforts to track foreign radicals. Prior to the explosion, flyers had been found in the area demanding the release of political prisoners.

It was assumed that the perpetrators were Galleanisti, but the bombers were never identified. Today, historians tend to agree that a cell of Italian activists was to blame. The spate of bombings in 1919/20 and the unfolding spectacle of the Bolshevik revolt in Russia caused panic. It left psychological scars that fueled America’s First Red Scare.

Illustrations, from above: Aftermath of bombing in the Wall Street (Library of Congress); Gori’s ‘Farewell to Lugano’; Cronaca sovversiva, July, 11 1914, with Carlo Abate’s nameplate of a proud but chained man; and A 1919 Red Scare cartoon: European anarchist ready to destroy the Statue of Liberty.