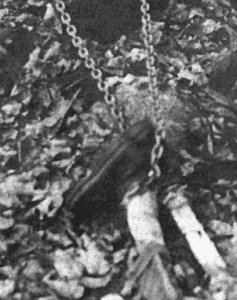 He would claim that his chains, padlocks and handcuffs would shackle him to salvation. He would be forced to do as Jesus had done – fast for 40 days and 40 nights in the desert. It was a quest to purify his body and his soul.

But his desert wasn’t exactly the howling wilderness Jesus had wandered, it was a patch of woods in North Hudson, about a half-mile from the Northway .

He had big feet. Size 13. He wore working man’s clothes and shoes, which had carried his six-foot three-inch frame far north from New York City and the cheap hotel he called home.

He hitchhiked, but not very well. He wore a three-quarters length wool coat, had a bushy beard and long hair, and was harassed by police for “soliciting rides.” He carried plenty of smokes – several packs of Pall Malls and two cans of roll-your-own Bugler, along with cigarette papers, and about 80 books of matches. He brought along three pens, and an 8 x 10 notepad, but never opened them. All this was stashed in his green duffle bag along with the chains.

The bag was heavy, because it contained all he felt he needed. There were two lengths of chain – one 10-foot, the other six – the kind of standard chain used by truckers and sold at truck-stops along the highway from New York City to North Hudson. There were several Ludell padlocks, and two sets of hand-cuffs. These he used to secure his arms and legs between two hemlocks. He tossed the keys out of reach.

Earlier, that spring, he had lasted three days before running out of water. He screamed himself hoarse before he found a rock and pounded relentlessly on the chain until it broke. He was found by state troopers shuffling down the highway wrapped in bands of steel and chains, obviously suffering from mental health problems.

The State Police criminal investigator Max E. Hunt later remembered that he was obsessed about a conspiracy that kept scientists from turning grass into milk like a cow. Police later said that he had been given a mental evaluation. “It wasn’t an elaborate mental exam,” Hunt said. “But he didn’t appear to pose any threat to anyone else. In fact, he didn’t appear to pose much threat to himself… He’d chained himself to a tree before and broke the chains when he ran out of water. He displayed, then, some sort of a desire to live.”

Later in an Elizabethtown court he said he would return and would find a better spot for his fast. Columnist Barney Fowler, who interviewed some of those in the courtroom that day and reviewed the court and police records, described him with the perspective of 1975:

“He was examined by mental health authorities. Symptoms noted included indifference, withdrawal, delusions of persecution and omnipotence and hallucinations. He was not considered dangerous. He was released. He was not considered violent. No one had been harmed. His promise had not been born in fact. He was, indeed, a man of strange idiosyncrasies, but the world was filled with wanderers who live in hellish strange worlds all their own.”

Five months later, on October 26, just before 9 am a hunter from Croton-on-Hudson noticed what he thought was a deer skeleton about a half mile west of the Northway. According to the police report, “after picking up the skull and noticing it seemed more human than animal, he started looking around and found what appeared to be shoes chained to a tree; he further saw clothes, canteens… he realized he had discovered the remains of a human body.”

State Police said they found relatives in New York, but his body remained unclaimed and the man in chains was buried at county expense.

You can read more about the Man in Chains in Barney Fowler’s Adirondack Album, Volume 2 (1980). William Braun covered the discovery for the Lake Placid News; his story can be found online [pdf].

John Warren is founder and editor of the New York Almanack. He's been a media professional for more than 35 years with a focus on history, journalism and documentary production. He has a master's degree in Public History and is on the staff of the New York Writers Institute, a center for literary arts based at the University at Albany. John lives in the Adirondack Park. He is co-founder of Adirondack Atlas, a geolocation, database and mapping services company serving the region, and his weekly Adirondack Outdoors Conditions Report airs across Northern New York on the North Country Public Radio network.