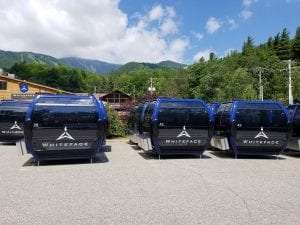 The first phase of the Midstation Lodge is expected to be completed for the start of the 2020 ski season. The historic lodge on the spot burned to the ground last November.

The old Bear Den lift is being replaced with a new quad lift system that uses a conveyor to make passenger loading easier. It’s located next to the Bear Den Lodge and is expected to be completed this fall.

The snowmaking system is being improved. New pumps are being installed in the expanded Ausable River Pump House, and on-mountain pipe and snow gun modifications are expected to improve the system’s efficiency.  More information can be found here.

The High Peaks Chair is being replaced with a quad chairlift. This update will extend a skier’s ride to the top of Gore’s true summit, opening up improved access to all of Gore Mountain’s four peaks and 110 trails. In addition, the Sunway Chair is being replaced with a quad lift. This lift will feature a modern conveyor-style loading experience that is ideal for beginners and families. The unloading area of the Sunway Chair has been improved and relocated further uphill.

An expansion of Gore Mountain’s reservoir for snowmaking is expected to significantly strengthen system capabilities. Gore has been steadily modernizing its snowmaking infrastructure with automated technologies, energy-saving compressors, and high-efficiency guns throughout the resort. The reservoir improvement will amplify these other system enhancements while helping Gore’s team provide more snow earlier in the season. More information can be found here.

The recently expanded Discovery Lodge is getting an additional 2,700 square feet of indoor space. The new space will be available for private group functions as well as daily use for all guests. The area incorporates large windows that overlook the main level to allow for natural light annd a more “Great Lodge” feel.

Visitors will also enjoy the Catskill mountain views from an expanded outdoor patio space. It will include fire pits, outdoor seating and direct access to the Discovery Lodge.

Season passes are currently on sale, with the best prices available until September 2nd, 2020 and include an assurance program that protects pass purchasers from the unexpected:

ORDA’s new RFID technology offers direct-to-lift access and online purchasing, so guests can go directly from their car to the slopes. The lift ticket media can be renewed over several years, preventing waste and adding hassle-free convenience for customers.

Established in 1982, the New York State Olympic Regional Development Authority (ORDA) was created by the State of New York to manage the facilities used during the 1980 Olympic Winter Games at Lake Placid. ORDA operates Whiteface, Belleayre and Gore Mountain ski areas; the Olympic Sports Complex at Mt. Van Hoevenberg; the Olympic speed skating oval, Olympic jumping complex and Olympic arena. As host to international and national championships, the Authority has brought millions of athletes, spectator and participants to the region, resulting in significant economic development.