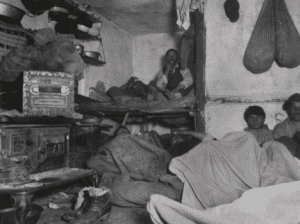 The “Man with the Muck Rake” appears in John Bunyan’s Pilgrim’s Progress as a person who only looks down gathering filth. His vision is fixed on carnal, not on spiritual matters. By seeking out what is disagreeable, he is blind to divine grace.

In a speech on April 15th, 1906 President Theodore Roosevelt referred to this passage when he acknowledged that men with ‘muck rakes’ may be indispensable to social well-being, but that applies only if they know “when to stop raking the muck.” There is a rich Anglo-American tradition of muckraking that has been instrumental in exposing injustice and corruption. Today, investigative journalism is under threat.

From 1830 to 1890 New York City underwent massive economic and social transformations. Manhattan’s Lower East Side became home to diverse groups of immigrants. By the 1890s, the district was one of the most densely populated places on Earth. Block after block of tenements housed large numbers of people living in appalling conditions, including Italians, Irish, Greeks, Chinese, and Jewish refugees from Eastern Europe. Each grouping tended to settle in relatively homogeneous enclaves. Many newcomers were employed in the garment or tobacco industries, working from home or in sweatshops. Because of the mixture of grinding poverty, overcrowding, epidemic disease, child labor, and crime, social critics feared for the physical and/or moral “health of the nation.”

The sharp increase in the number of immigrants caused severe shortages of housing opportunities. The depression of the 1870s forced many New Yorkers to live on the streets. Criminality soared. The number of homeless children reached shocking levels. Youngsters organized themselves in gangs of newsboys (and girls) or bootblacks fighting their corner for scraps and protect their hard earned coins.

New York’s social misery encouraged child welfare reformers to intervene. In 1853, Charles Loring Brace was commissioned by the New York Daily Times to write a series of articles entitled “Walks among the New York Poor.” To gain an insight in living conditions, he joined a group of Italian organ grinders. New Yorkers associated organ grinding with Five Points, Lower Manhattan, which was often described as a notorious densely populated, disease-ridden, and crime-infested slum. In 1880, nearly one in twenty Italian men living there was an organ grinder.

Brace founded the Children’s Aid Society later that same year with a missionary zeal of supplying education to abandoned and abused children that roamed the streets of New York and, ultimately, assimilating them into a (Protestant) American way of life.

London experienced similar problems. Its rapid growth produced hardship for many inhabitants as housing and sanitary facilities could not keep pace. Houses were built cheaply. London’s East End was a social nightmare, a gothic tale of contemporary suffering.

By the middle of the century Henry Mayhew, co-founder of the satirical magazine Punch, began publishing a long-running series on London laborers and the London poor. He intended to show how marginalized people survived in what was then the richest city in the world. The articles were published in the Morning Chronicle (the newspaper where Charles Dickens started his career writing under the pseudonym Boz) and attracted an enormous readership.

In 1872, (William) Blanchard Jerrold published London: a Pilgrimage. The word pilgrimage suggests the moral significance attached to such an undertaking. French artist Gustave Doré produced 180 engravings for the book. The two men spent many hours exploring the capital, visiting night refuges, lodging houses, and opium dens. Doré’s images present a hellish vision of East End poverty. The study of destitution and the description of immigrant communities created interest and curiosity. It had a bizarre consequence.

According to the Oxford English Dictionary the word “slumming” was first used in 1884 to refer to the increasing number of people who visited London’s slum areas for either social observation or out of curiosity. By the 1890s the idea of “slumming it” in the dark and “forbidden” East End had become a risky pastime of wealthy youngsters. It was an odd encounter between privation and perversion. Oscar Wilde’s hedonistic Dorian Gray gave literary status to slum tourism. The hero of the novel travels into the dark streets and alleys of Whitechapel to sample its corrupt delights of entertainment. 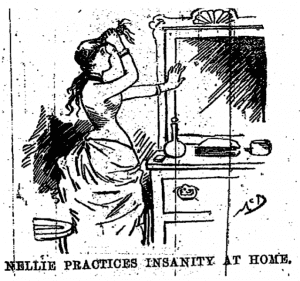 In September 1884, the New York Times published an article under the heading “Slumming in this Town: A Fashionable London Mania Reaches New York.” Its author claims that Londoners used slumming as a way to push for sanitary reforms. New Yorkers by contrast had turned the “mania” into a form of sight-seeing whereby participants would disguise themselves in “plain and homely” clothes in order to go unnoticed. Some were accompanied by their own minders – just in case. Spreading to other cities, the practice crept into guide books (San Francisco banned such tours in 1909). Groups wandered through urban slums to peer into brothels, saloons, and opium dens.

With a sharp increase in the circulation of magazines and newspapers, the role of the illustrator came to the fore. Cartoonist Thomas Nast made his career at Harper’s Weekly and engraver Stephen Henry Horgan pushed for the inclusion of camera images in the Daily Graphic. On March 4, 1880, the paper published the first halftone photograph ever printed in a newspaper. Its subject matter? – “A Scene in Shantytown, New York.” 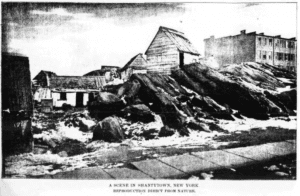 As such publications became engaged in the social debate, impact was a prime concern, not aesthetics. Stylistically, this demanded a documentary and unsentimental approach. There is no poetry in poverty. Muckraking became a tactic in which Nellie Bly (real name: Elizabeth Cochran) set a precedent.

In September/October 1887, Bly spent ten days in New York’s notorious Women’s Lunatic Asylum on Blackwell’s Island. Posing as insane, she highlighted the brutal treatment to which patients were subjected in a series of articles for Joseph Pulitzer’s New York World. They caused a sensation and were subsequently published in book form as Ten Days in a Mad-House (accompanied by her own illustrations). Such was their impact that New York City massively increased its budget for the care of the mentally ill. Publishers took note. Muckraking sold stacks of newspapers. 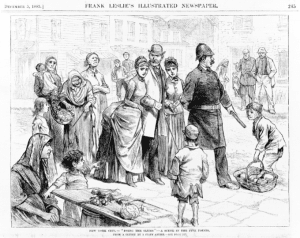 Bly’s exposé made an impact on Jacob Riis. Born in May 1849 in Ribe, Jutland (Denmark), Riis trained as a carpenter. He fell in love with his employer’s daughter, but she rejected his marriage proposal. With few work opportunities in the region, he decided to move to the United States. In 1870, he sailed from Copenhagen via Glasgow to New York City, arriving on June 5th. He found employment as a carpenter, but lost his job during the financial panic of 1873. He joined an army of dispossessed immigrants and shared their fate. The experience of extreme poverty in an uncaring environment hit him hard.

Riis started his career in journalism in 1878 when he was employed as a police reporter in the Mulberry Bend area which was notorious for its public squalor. A few months after Bly’s trip to Blackwell’s Island, Jacob published his first investigation for the New York Sun, the most popular of the “proletarian” penny papers, revealing the wretched conditions of slum neighborhoods.

He made experimental use of Blitzlicht (flash photography), a German invention developed in 1887. The pictures were startling and their effect profound. Riis exposed the dehumanizing conditions under which the Lower East Side’s residents struggled in a ground-breaking series entitled How the Other Half Lives (subtitle: Studies among the Tenements of New York). Once published as a book in 1890, it became a bestseller and launched his career as a social reformer and, eventually, confidant of President Theodore Roosevelt.

Riis organized his book in the shape of a slum tour in which he moved from one neighborhood to another describing the various resident ethnic groups. This was a pre-established Mayhew-type genre which included an element of slum tourism in order to entertain the reader by describing how “funny” foreigners coped in a hostile environment.

In a society in flux, stereotypes appear to be reassuring. Riis presented a text book of fixed racial typology, but accompanied by a set of photographs that stirred authorities into action. His message was simple: squalid conditions make for squalid people. He was both a social conservative and a muckraker.

Photojournalism was the first medium to convey social issues to mass audiences. Once papers and news magazines managed the capacity to include photographs, and editors realized the sales value of illustrated muckraking, many began to feature photographic documentaries.

Jacob Riis’ most famous photo was taken on Bayard Street, Lower Manhattan. Named “Five Cents a Spot,” it shows an overcrowded room of lodgers bedding down for the night on their allocated “spot” on the floor. The impact of the shot made social critics realize that the camera was there to serve as a tool for advocating reform. It dawned upon them that a striking image has the power to shock public opinion and change its course. A single shot strikes deeper than a million words.