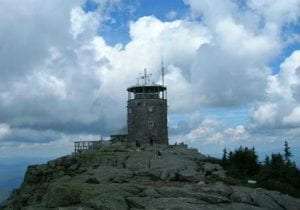 The next lecture will be “The Role of Clouds in Atmospheric Chemistry – Current Understanding, Ongoing Research and Future Work at Whiteface Mountain,” a presentation by Christopher Lawrence, ASRC Graduate Student.

During the 1970s and 1980s, acid rain became a growing air quality and environmental challenge in the U.S. and much of the globe. Extensive research determined that chemistry occurring with clouds combined with sulfur dioxide (SO2) and nitrogen oxide (NOx) emissions from the burning of fossil fuels was the primary contributor. This research helped shape the Clean Air Act Amendments of the 1990s, helping to reduce the negative impacts of acid rain and allowing ecosystems to recover within the U.S. and similar legislation in other regions.

With acid rain becoming a less severe problem, focus has shifted to other compounds like Organic Carbon, which now characterize the dominant chemical constituent in atmospheric particulate matter and cloud water in many different regions, including the Adirondacks. Current research has shown that clouds could play a key role in the chemical processing of Organic Carbon in the atmosphere, affecting air quality, ecosystem health, and climate. This talk will discuss some of the biggest questions regarding how clouds interact with Organic Carbon.  Current and future research at Whiteface Mountain to better answer these questions will also be discussed.

August 4th – “Acid Rain in the Adirondacks: The Progress Towards Recovery,” a presentation by Phil Snyder, Laboratory Manger for the Adirondack Lakes Survey Corp.

The history of the Adirondack Long Term Monitoring program tracking the chemical effects of acid deposition in Adirondack lakes and ponds. In recent years, reduced emissions have allowed many lakes to begin to recover and native fish species to return, but years of acid deposition have left many sensitive waters in a vulnerable state.

Whiteface Mountain has a long history of recreational and scientific development. A presentation of past scientific activities and current programs, including the development of the ASRC Whiteface Observatory and Field Station will be discussed.

The Atmospheric Sciences Research Center has operated the Whiteface Mountain field station since 1961. The station is at an elevation of ~1500m (~ 90m above tree-line) in the hearty of the Adirondack Park. More information can be found online.