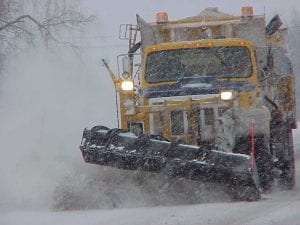 The NYS Senate granted final legislative approval Thursday to a bi-partisan bill that is expected to help reduce road salt pollution and protect drinking water in the Adirondack Park.  The Randy Preston Road Salt Reduction Act was passed in the NYS Assembly earlier this week and now heads to Governor Andrew Cuomo.

The legislation creates an Adirondack Road Salt Reduction Task Force and Pilot Program. If approved by the Governor, the new law would establish a salt-reduction pilot program from October 2021 through 2024 to test alternative measures shown to work better and cost less than current winter road maintenance practices.

It’s hoped the bill will work toward decreasing salt pollution to achieve improvements to the health of Adirondack lakes, streams, and private wells while reducing harm to citizens and damage to vehicles and infrastructure. Highway safety is expected to remain the top priority.

The Adirondack Park contains more than 11,000 lakes and ponds, and more than 30,000 miles of rivers, brook and streams and is the source of most of the state’s rivers.  It also contains thousands of miles of roads traversing hard bedrock, thin soils and steep slopes, areas that are especially susceptible to road salt damage. Preliminary results from pilot salt reduction efforts in the Lake George Region have demonstrated in excess of a 30% drop in salt expenses. Roughly $16 million is spent on road salt in the Adirondacks each year.

Studies of drinking water in the Adirondacks have already shown widespread contamination.  “Drinking water across the Adirondacks has been compromised by road salt contamination,” according to Dan Kelting of the Adirondack Watershed Institute. “Our testing shows a strong correlation between salty water and state-maintained highways. The state is applying about 37 tons of salt per road lane mile right now. That is not sustainable from an environmental and human health perspective.”

Mirror Lake, at the heart of the Village of Lake Place, is nearly surrounded by roads. “The health of Mirror Lake and several other waterbodies, so essential to wildlife and to our recreational economy, are in decline due to road-salt,” said Kelley Tucker of the Ausable River Association (AsRA). “Heavy salt-laden water reduces oxygen levels for aquatic organisms and prevents the natural mixing activity of lakes – setting them on a dangerous downward trajectory. Stream and lake health depend on our ability to act to reduce road salt inputs.”

“Mirror Lake is one of just a handful of lakes that has had the natural turnover process interrupted by an accumulation of salt at the bottom of the lake,” said Dr. Brendan Wiltse, who has been studying the issue at the AsRA. “The lack of turnover results in low-oxygen at the lake bottom, threatening the native lake trout found in the lake and making it more susceptible to harmful algal blooms,” Wiltse said.

In addition to damaging water quality, vehicles and roadways, road salt corrodes bridges and parking structures.  Repair, maintenance and replacement of road infrastructure corroded by road salt costs are estimated to cost $18,563 per land-mile per year.

Repair, maintenance and depreciation of motor vehicles from road salt corrosion amounts to an estimated $3,416 per lane-mile per year. As salt leaches into groundwater, it is making streams saltier in the summer and is releasing heavy metals and other toxins from sources that would otherwise remain harmless, the Watershed Institute’s tests have shown.

This new legislation directs the Dept. of Transportation and Dept. of Environmental Conservation and the Dept. of Health to cooperate in a three-year Adirondack Park wide road salt application reduction pilot.

Complementing this legislation, AdkAction continues to work with municipalities throughout the Adirondacks to sign our Pledge to Reduce Road Salt which helps to ensure local action. This memorandum of understanding identifies issues associated with road salt applications, as well as steps that may be taken to help reduce related impacts.

To date, 26 Adirondack towns and villages have signed the Pledge, and are working toward a proactive approach to reducing their road salt usage while maintaining safe driving conditions through the use of best practices.

The bill requires a Task Force report and recommendations by September 1, 2021, and states that “The task force shall recommend Adirondack state road winter maintenance practices to remediate salt contamination of our surface and ground waters.”

“The Adirondack Road Salt Task Force recommendations for updated levels of service, best management practices, and road salt reduction targets shall guide the Departments of Transportation, Health, and Environmental Conservation in measurably reducing sodium and chloride levels in both surface and ground waters,” the bill states.