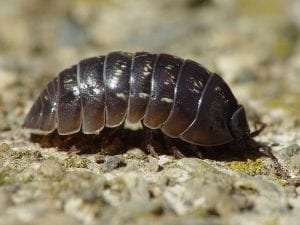 You’ve probably seen these little fourteen-legged chimeras at some point, though you may not have paid them any mind since you were a kid.

Part shrimp, part kangaroo, and part armadillo, the ubiquitous pill bug (Armadillidium vulgare) is a harmless, if sometimes annoying, critter which scuttles about at night feeding on dead vegetation.

Also known as potato bugs or roly-polys, these are the guys that pull themselves into a tight little ball for protection when disturbed.

Pill bugs don’t bite, sting, carry disease, chew on your house, or do anything else overtly unpleasant, and kids usually love playing with them. In fact, they (pill bugs, not kids) make good pets as long as your expectations around training aren’t too high. Occasionally they find their way into cellars and become a bother, but they’re easily managed.

Tip over a log, lift a flat rock, or check under a flower planter, and in most areas you’ll find these crustaceans. Why they crawled out of the sea and adapted to live on land is anyone’s guess – maybe the ocean got too crowded at some point. Reluctant to give up all their aquatic traits, pill bugs actually breathe through gills. That’s why they’re found in damp locations – they need continually moist gills, or oxygen exchange will be disrupted and they’ll suffocate.

Ranging from 8.5 mm to 17 mm (about 3/8 to 9/16 of an inch) long, pill bugs are grey to brown, with a markedly convex body profile. This latter feature is how one can tell them apart from their cousins the sow bugs, which occupy a similar ecological niche as pill bugs. Sow bugs are woodlice in the genera Oniscus and Porcellio, and have a more flattened body. Also, sow bugs are unable to ball up for protection. This rolling-up process is known as conglobation, a term coined specifically to help Scrabble players.

The kangaroo aspect of pill bugs is that the female has a pouch on her abdomen called a marsupium in which she lays her eggs. The young hatch inside her fluid-filled marsupium and live there until they’re large enough to venture on their own.

Although pill bugs originally came from Europe, they don’t meet all the criteria for an invasive species. They do not cause significant human-health and /or economic and /or environmental harm, something which characterizes invasive species. I doubt pill bugs feel bad about not being allowed into the club. In truth, they help recycle nutrients, thus aiding in the formation of healthy topsoil.

While not technically invasive, they’re sometimes a minor nuisance if they wind up indoors. Controlling them may require a gun, a landscaper, or a dehumidifier. Since they are obliged to live in damp places, reducing humidity is key. Open basement windows and use fans or dehumidifiers to lower the humidity in the cellar.

Maintain a strip of crushed stone (or other material that readily dries) around the perimeter of your home to keep all vegetation and mulch away from the foundation. Finally, break out the caulk gun to seal cracks between foundation blocks and other potential entry points. I can’t overstate how effective diligent caulking can be in excluding any critter – you’ll get years of pest control with one thorough job of sealing cracks.

If you find pill bugs in your yard, don’t panic – these pills are chill.