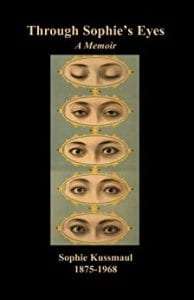 Edited by Sinclair Seevers, the memoir spans her first six decades, two thirds of Kussmaul’s long life.  It’s a vivid account of her shy childhood in the 1870s through the years of the Great Depression.

Seevers told the New York Almanack:  “Sophie‘s story is real life seen through the eyes of a woman whose spirit was never broken who lived her life as she chose.”

Sophie’s granddaughter, Sinclair Sea Seavers, also known by Jinni Davis, was born in Fabius New York. Sinclair was a saw mill operator at Oregon for 15 years,. She was a trapeze and high-wire artist before going west. She is the great granddaughter of professor Otto Kussmaul, and great niece of Adolph Kussmaul.