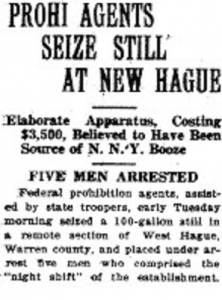 During Prohibition the social life of so many Americans was made criminal overnight. Here’s a little nugget from the July 2, 1931 Ticonderoga Sentinel.

One wonders if the men arrested here ever served any hard time. I suspect they did.

The men were held in the Ticonderoga jail until Tuesday afternoon when they were arraigned before U.S. Commissioner David S. Fisk in Hudson Falls, who released the prisoners on bond of $1,000 each.

Two of the men, Natale Morino of Rutland, Vt., and Joseph Goricalo of Witherbee, were released pending a hearing tomorrow, and the remaining three waived examination, and were ordered to appear before Federal court at Malone on July 7th. The trio gave their names as Patrick Natti and John LaFerne of Newark, New Jersey, and Patrick Chioffi of Troy.

The plant was reported as one of the largest ever seized in this part of the state, and it is believed by Federal authorities that the still served as a source of a large proportion of the alcohol illicitly sold throughout northern New York and eastern Vermont.

The distillery was equipped with the most expensive apparatus, and the raiders estimated the cost of the complete outlay at about $3,500. The agents reported they found 300 gallons of alcohol, sixty barrels of yeast, two tons of coke, 34,500 gallons of mash, four 3,000 gallon vats and one 1,500 gallon vat.

Also Included in the equipment was a 25-horsepower upright steam boiler, a 1,500 gallon still and a 50 gallon condenser.

All the apparatus was dismantled and taken to Albany. The alcohol and yeast were destroyed.