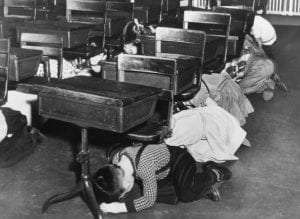 During the Civil War personal identification of soldiers killed and severely wounded in combat was daunting, because of inadequate record keeping in both the Union and the Confederate armies.

An early attempt to ID them was called “name discs” or “soldier pins,” but these met with limited success. Many of those killed in the Civil War were simply marked unknown.

During the First World War aluminum discs the size of silver half dollars were required for all military service members. They had to wear two – one remained attached to the body of the deceased, while the second was used to mark the coffin or grave, often where they fought and died.

During the Second World War service men and women were issued the now more familiar metal rectangular ID tag, with a notch on its bottom edge, which acquired the nickname “dog tags.”

During the war teachers in New York and around the country, especially on the coasts and near defense production areas, were trained in civil defense and first aid in preparation for the enemy bringing the war to the continental United States.

The City of New York’s Board of Education distributed emergency equipment to teachers, including identification tags similar to those issued to the military.  Students not only wore the tags, but were also fingerprinted.  By 1942 1.6 million school children in the City of New York had received tags, embossed with their name, date of birth, school district and a serial number. 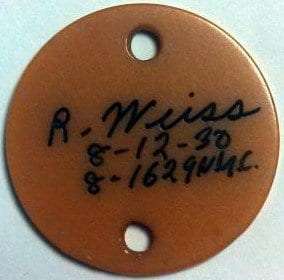 In 1942, Rosalind Weiss Rothman attended public school on the Upper West Side of New York. She  remembered that the children were required to wear the tags everyday.

“I even remember one air raid warning (not a drill) I was at the Museum of Natural History with my class… the alarms sounded,” she said. “Our tags were checked so that we could be returned to our homes. The whole city shut down.”  Rosalind’s circular brown tag, was made of Bakelite (an early form of plastic). It’s just over an inch long with the inscription: “R.Weiss/8-12-39/8-1629NMC.”

Just seeing it makes one wonder how kids and parents felt putting this “necklace” on as one of the daily rituals for getting ready for school.  As a former teacher, I’m reminded that in addition to education, teachers are expected to deal with many serious crises in our students lives.