In 1850, after a long journey, a large German family sailed from Hamburg into New York Harbour. There was no Statue of Liberty to welcome them. Newcomers faced no questions or restrictions. There was no Castle Garden (opened in 1855), no Ellis Island (opened in 1892) – they simply made their way and settled in the city.

In 1785 William Sloman, a ship’s captain of Great Yarmouth, Suffolk, settled in Hamburg with his wife and two sons. He became a Hamburg citizen in 1791 and seven years later established himself as a ship broker. To his son Robert Miles Sloman he left a few ships that sailed between Germany and England. In February 1836 Robert opened the first regular sailing from Hamburg to New York with the wooden bark Franklin.

By 1850, Robert had changed from sail to steam with the English-built Helena Sloman. The first German transatlantic screw-propelled ship, she made her maiden voyage under command of Captain Paul Nickels Paulsen on May 31, 1850, arriving in New York on July 1st. Sadly, the company’s fortune did not last.

On the ship’s third crossing in November 1850 she encountered a severe gale and got into trouble. She was sighted, sinking, by Captain Henry Hovey on the American sailing ship Devonshire. During the rescue of 180 passengers and crew, a lifeboat capsized and nine lives were lost. One of the casualties was the father of Charles Nelson. The youngster and the rest of his family survived. He would become a leading businessman, owner of Greenbrier Distillery, one of America’s major whiskey producers.

Sloman’s place in the shipping market was taken over by HAPAG (Hamburg-Amerikanische Packetfahrt-Aktien-Gesellschaft), generally referred to as the Hamburg-America Line, which had been established in 1847. It developed into one of the world’s largest shipping companies, serving the large demand created by German migration first, and later by the Jewish exodus from Eastern Europe. 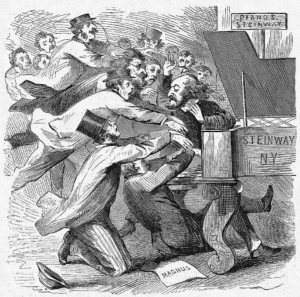 During the 1830s Europe was gripped by serious social unrest. Liberal and nationalist movements clashed with conservative authorities. France had set an example. The Revolutionary and Napoleonic decades had created an anticipation and excitement among younger generations in Europe. They dared to look forward, believing renewal and liberation were a concrete possibility, and poverty and injustice could be eradicated.

Henri de Saint-Simon’s teachings suggested that a “golden age” was imminent, that workers would be free and equal. The message was carried forward by Karl Marx in his economic and political writings of 1844. The world, the modern world was full of potential.

In politics and art, the cry for modernity was one of imminence and expectation. Everywhere, the young were on the march. In 1848 the February Revolution broke loose in Paris, leading to the creation of the Second Republic. Soon after, Europe was hit by a wave of uprisings. Citizens demanded democratic diversification, social justice, opportunities for women, and guarantees of human rights. There were calls for unification in Germany and Italy.

Hopes were soon crushed, liberal movements repressed, militants persecuted, and individual freedoms curtailed. Disillusioned, many citizens decided to leave Europe with the feeling that the Old Continent was finished. The intensity of despair was expressed in a bitter note to his journal by the exiled Russian activist Alexander Herzen: “Anyone, who can put off from himself the old Adam of Europe and be born again a new Jonathan, had better take the first steamer to some place in Wisconsin or Kansas; there he will certainly be better off than in decaying Europe.”

Those who emigrated to Britain or the United States were known as Forty-Eighters. They were politically active and well-educated. Others fled the Hungry Forties after several seasons of failed crops and other calamities that struck the rural economy. Many left home fearing further violence and unrest. Producers of luxury goods and skilled craftsmen lost their livelihood. Among those were makers of musical instruments.

The phrase “Twelve Apostles” was applied in 1860 by Edward Rimbault in his study on the pianoforte. In doing so, he referred to a group of mainly German piano makers who had fled to London (about 1760) during the Seven Years’ War (in the United States, the French and Indian War) which had a devastating effect on the economy. They established their own firms in the capital. London was attractive to newcomers because of its political stability. Commerce was not hampered by restrictive guilds and no license was needed to start trading.

London developed into a center of instrument building. By the middle of the nineteenth century, there were more than two hundred piano making factories, three quarters of them north of the Thames. Competition was fierce. Manufacturers sued each other over patent rights and the theft of trade secrets.

The scramble to attract the public eye has been described as a “piano war.” Disharmony was all around. A number of craftsmen decided to take their skills elsewhere. One of the original “Apostles” was Johannes Geib. Trained as an organ maker in Rhineland-Palatinate, he had settled in London. In 1797 he moved to New York where he and his son produced organs and pianofortes until 1814. John Geib was likely the first German piano maker in New York.

During the second half of the nineteenth century a large number of instrument builders settled in the city. Albert Weber arrived from Bavaria in 1845 and founded the Weber Piano Company on Broadway. Otto Aldenberg settled in New York in 1855 and opened a factory in about 1865. Jacob Doll came to the metropolis in 1863 at the age of fourteen. Having founded his own firm in 1885, he then took control of the Augustus Baus Piano Company at 510/6 Southern Boulevard. Charles [Karl] Baumeister moved from Frankfurt in 1867. In 1894, he established the Baumeister Piano Company on West 42nd Street. From 1898, the firm was run by his daughter Hattie, the first female piano manufacturer in the United States.

These are just a few names in a long list of craftsmen. Manufacturers employed an army of part producers such as key makers; hammer coverers; truss carvers; gilders; veneer and ivory suppliers; stool makers; and tuners. Such was the reputation of expatriate piano makers that rival companies tended to market their products under German-sounding names.

On board of Helena Sloman’s maiden voyage from Hamburg to New York was fifty-three year old Heinrich Engelhard Steinweg accompanied by his wife and seven children. Trained as a cabinet maker in Seesen, Lower Saxony, he had served as a bugler in the Duke of Prussia’s army at the Battle of Waterloo. He then started constructing dulcimers (a variety of zither), before turning is hand to building pianos. 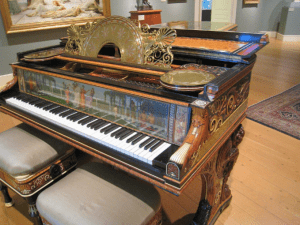 Political upheavals and economic uncertainties made him decide to bring his skills to New York. He left his eldest son Christian Friedrich Theodor behind to continue building the Steinweg piano brand of which 482 samples had been sold. In 1853, Heinrich occupied a workshop at the back of 85 Varick Street, Lower Manhattan. The first American piano he produced there was numbered 483. A year later, he moved his company to larger premises at 82/8 Walker Street. By the 1860s, Steinway had built a new factory at Park Avenue (between 52nd and 53rd Street) where it covered a whole block, employing 350 workers. The employees were mostly immigrants and German remained the company’s official language. It was not until 1864 that the family name was anglicised.

Steinway built his early reputation on successes at international trade fairs. The 1867 Exposition Universelle was the second of its kind to be held in Paris and was the largest to date. For the United States the exhibition was of vital economic significance as the country had just emerged from the Civil War and entered Reconstruction. A celebration of technical and industrial progress, the

In 1902, the 10,000th Steinway piano was built for President Theodore Roosevelt to be housed in the East Room of the White House. Business peaked during the early 1920s when the firm was selling more than 6,000 pianos a year.

Henry Ziegler Steinway was the last family member to be in control of the company. He was born on 23 August 1915 at 375 Park Avenue, Manhattan – the same building in which his great grandfather had built some of his early pianos (since demolished and now the location of the Seagram skyscraper).

The 1960s saw the Yamaha-led Japanese invasion of the piano market. Falling sales and family rifts made Henry decide to sell the firm to the CBS Corporation in 1972, but he stayed on as the company’s brand ambassador. Until his death in September 2008, he remained a prominent figure at Steinway Palace, the piano makers’ grand showroom on Manhattan’s West 57th Street.