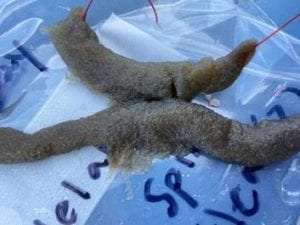 No known control methods exist to eliminate fishhook or spiny waterflea once established in a water body. Efforts now focus on preventing the spread of this species to other bodies of water in the region.

The Lake Champlain Basin Program recruited and trained boat launch stewards virtually in 2020 for the 14th season of this invasive species spread prevention program on Lake Champlain. Following COVID-19 safety protocols, the ten stewards assist boaters in actions they can take to prevent the spread of aquatic invasive species while they are launching and retrieving their vessels.

LCBP stewards removed and properly disposed of the fishhook waterfleas, which were discovered ten days earlier in 2020 than in 2019, likely due to a rapid increase in water temperatures this spring. The risk of spreading this species remains high.

Similar to the spiny waterflea, which was confirmed in Lake Champlain in 2014, the fishhook waterflea is an aggressive predator of plankton which provides food for native species. There are no known risks to human health from the fishhook waterflea, but they are known to foul fishing gear. Pleasure boaters are also at risk of spreading this aquatic hitchhiker on anchor lines and rigging.

The fishhook waterflea is a native of Eurasia. It arrived in the Great Lakes in ballast water in the 1980s and spread to other water bodies. It likely arrived in Lake Champlain by hitchhiking overland on recreational boats, trailers, fishing lines, and other equipment. The Finger Lakes in New York and Lake Ontario are the closest lakes known to host the species.

While the impact from the spiny waterflea to the Lake’s food web is unknown, researchers have observed shifts in the zooplankton community in Lake Champlain and other lakes where the species has become established. The waterflea eggs are resistant to drying, which limits the management actions to help prevent the species from spreading.

“Because fishhook waterflea has life stages that are invisible to the naked eye, they are often difficult to detect,” said Meg Modley, Aquatic Invasive Species Management Coordinator at the Lake Champlain Basin Program. “The clean, drain, dry message applies to all recreational boaters because the waterfleas often hitchhike on anchor lines, in bilge water, and on fishing lines and tackle. We are asking all boaters to help us inspect their equipment, drain water from all compartments, change fishing lines when moving between water bodies, and utilize complimentary decontamination stations where available that have hot water and high pressure capability to remove invasive species.”

“Over the next few weeks the risk of spread of waterfleas from Lake Champlain to other inland waterbodies is very high,“ said Louis Porter, commissioner of the Vermont Fish and Wildlife Department. “We encourage all boaters and anglers to check their anchors, rigging and fishing lines and remove any plants or animals they see. We continue to count on all boaters to clean, drain, and dry their boats and equipment to help prevent the spread of all aquatic invasive species.”

Hot water, high pressure decontamination of boats and equipment that are in contact with water bodies known to contain fishhook or spiny waterflea is recommended.