“The great tragedy of life is not that men perish, but that they cease to love.” — W. Somerset Maugham.

Before antibiotics, one of the more powerful medicines against tuberculosis was love. Happy patients tended to be more successful in overcoming the disease, so health care providers took every step to improve patients’ state of mind.

Patients stayed busy with occupational therapy and social activities. In the Adirondacks around Saranac Lake, cure porches were oriented toward the best views to boost patients’ sprits with natural beauty. And then there was cousining — a term for informal romances that developed between patients.

“Cousining” is a curious word. It carries the meaning of a lasting, reassuring, family relationship — something patients were sorely missing during their time away from home. The term also implies, in a tongue-in-cheek way, casual and possibly forbidden love. 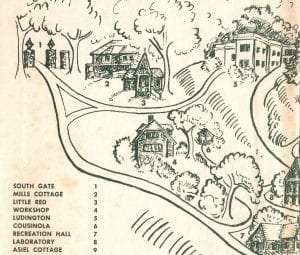 The Trudeau Sanatorium in Saranac Lake was the perfect setting for romance. Many of the patients were single, in their early twenties, and in the early stage of disease. Faced with the reality of death, they felt driven to live life to the fullest. A gazebo at the Trudeau Sanatorium was called the “cousinola,” as it was a favorite spot for cousins to get away to be together.

At the Trudeau San, other area sanatoria, and throughout the cure cottages of Saranac Lake, love flourished between patients. Nurses and doctors were not immune. Some patients found a cousin in someone who was temporarily separated from a spouse left back home. Some cousins just held hands, but others did much more and ended up at the altar. More than one person walking down Main Street in Saranac Lake today is the result of cousining. 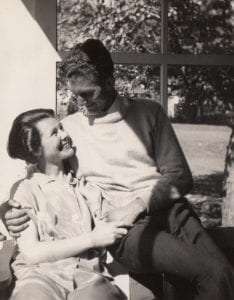 While Saranac Lake embraced cousining in various forms, some relationships were still taboo. One remarkable love affair, long hidden in plain sight in our local history, is that of famed author W. Somerset Maugham.

In the 1940s, Maugham’s longtime romantic partner Gerald Haxton contracted tuberculosis. The couple came to Saranac Lake seeking a cure in 1944. Maugham stayed at the Hotel Saranac while Haxton cured at the Alta Vista Lodge.

Although Haxton’s health improved for a few weeks, he died later that year. Tragically, Somerset Maugham lost his partner of 30 years in an era when their relationship was considered a crime.

Love stoked the will to live, but not all love lasted. Our collection at the Saranac Laboratory Museum contains beautiful photographs of patients gazing at each other on cure porches, madly in love.

Some snapshots show couples that spent the rest of their lives together. Others show relationships cut short by death or the complications of life.

The images poignantly capture the moment between two people when, against all odds, all was well in the world.

Illustrations, from above: Mary Welday and Duke Huntington cousining in Saranac Lake (courtesy Priscilla Goss); a map of the Trudeau Sanatorium, including #6, the Cousinola, by M. L. Herold for Wish I Might by Isabel Smith; and Betty Koop with a friend (courtesy Theresa Brown).