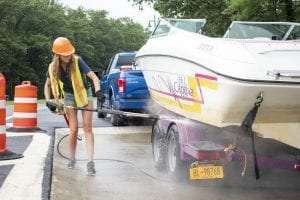 According to an audit released by State Comptroller Thomas P. DiNapoli, the Department of Environmental Conservation (DEC) needs to improve efforts to control invasive species such as zebra mussels, hydrilla and giant hogweed that have established footholds across New York state and threaten native species, agriculture and tourism,

“Invasive species can wreak havoc on our natural ecosystems and be harmful to people. They cause a loss of wildlife habitat, native plants, fish and animals as well as losses for farmers and industries that depend on outdoor activities,” DiNapoli said in an announcement of the audit’s results. “The agency has undertaken important steps to address this problem, but my auditors found several areas where DEC could strengthen its practices to identify non-native plants and animals and stop them from spreading. I urge DEC officials to follow our recommendations to protect New Yorkers and keep our precious natural resources intact.”

“We applaud the progress over the last 10 years funding an Adirondack Park wide system of staffed boat inspection and decontamination stations,” said Adirondack Council Executive Director William C. Janeway. “As Comptroller DiNapoli’s audit points out, unfortunately this infrastructure and programs meant to preserve Adirondack waters continue to go underutilized. In New York, there is no law requiring boaters to use inspection stations, and each year Adirondack waters and communities pay the price. Every year we find additional costly and sometimes permanent aquatic invasive species infestations, all of which could have been prevented. We thank Comptroller DiNapoli and his team for this work, and all they do to safeguard New York finances and preserve clean water, clean air and the environment.”

Fishing is severely impacted by invasive species, causing an estimated $500 million in economic losses each year, 80 percent of which affects commercial and sport fishing. Controlling the spread of an established invasive species can be costly. For example, between April 2017 and September 2019, DEC spent nearly $1.8 million trying to control and stop the spread of hydrilla and planned to spend more.

As the state’s environmental regulatory agency, oversight responsibilities to protect, improve, and conserve New York’s natural resources generally rest with DEC. To meet its responsibilities, DEC has implemented a range of programs and processes to help control the spread of both aquatic and terrestrial invasive species.

DEC’s efforts include creating and posting required preventive signage in campgrounds and boat launch sites and contracting or partnering with boat stewards who are not DEC employees to inspect boats entering and exiting public waters to ensure they’re free of invasives, responding to outbreaks, and educating the public on reducing the spread of invasive aquatic plants and animals. DEC also uses iMapInvasives (iMap), an online invasive species database, to document and share invasive and non-native species observations, surveys, assessments and treatment data.

In assessing the agency’s boat steward program, auditors conducted site visits to boat launches. Fourteen of them had stewards assigned, seven of which were under DEC’s direct oversight. Auditors discovered stewards were not inspecting all watercraft launched or retrieved at some sites. In some instances, the location of the steward’s inspection station did not allow a clear view of watercraft launching or exiting, likely limiting their ability to monitor compliance with cleaning requirements. In other instances, stewards did not approach boaters they saw leaving the waterbody to ensure their vessels had been properly cleaned. They also observed that required educational signage about invasive species was not always found at launch sites or was hard to find.

Giant Hogweed: a noxious weed that can cause painful burns and scarring if touched.
Emerald ash borer: an invasive beetle that infests and kills North American ash species including green, white, black, and blue ash.
Hydrilla: an aquatic plant that is one of the most difficult aquatic invasive species to control and eradicate in the United States.

Develop a process to: regularly communicate duties and responsibilities to registered boat owners and stewards; monitor steward performance; and coordinate with other oversight entities to improve preventive efforts at public boat launches throughout the state.

DEC officials generally agreed with the audit’s findings. Their complete response is included in the final report.