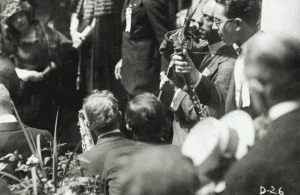 Hughes, a lawyer in New York City at the time, and “a troupe” of Big Apple entertainers traveled on the same train from New York City to Marion the morning of Aug. 24.

Hughes, the GOP 1916 standard bearer, was there to meet privately with Harding about campaign strategy, and Hughes agreed to make a few public remarks at the Harding-Coolidge Theatrical League rally on the front porch of Harding’s home.

“The Hardings took the old front porch rocking chair into the house today and welcomed a host of jazz kings, shimmy artists, vamps and other varieties of stage and movie stars who came to call on the Republican presidential campaign today,” reported The Rock Island Argus and Daily Union of Rock Island, Ill. Jolson, headlining the rally, sang the campaign song “Harding You’re the Man For Us,” which Jolson composed and wrote.

“So it’s Harding, lead the GOP. – Harding, on to victory,” the chorus between verses goes. “We’re here to make a fuss, Warren Harding you’re the man for us.” (You can hear a version here).

Harding employed an unconventional “front porch” campaign strategy – a strategy some suggest may be revived this year as a result of the COVID-19 pandemic.

Instead of the traditional whistle stop campaign by rail, Harding invited celebrities to come to Marion to endorse him, and throngs of reporters followed, getting his message out.

In another instance, the Chicago Cubs came to Marion on Sept. 2 to play an exhibition baseball game against a team of local semi-professional players, The Post-Star of Glens Falls reported. Harding threw out the first pitch.

It was somewhat the equivalent of a Rose Garden strategy, without the privilege of incumbency.

On theater day, about 20 actors and actresses, a jazz orchestra, and a 100-piece band paraded through downtown Marion shortly before noon, winding up at Harding’s home.

“I have been thinking lately that there is a great likeness between political life under popular government and many of our most successful productions on the stage,” Harding told the crowd.

Successful government, like a successful play, he said, must involve the whole cast and not just one lead actor.

“I think it is a very practical thing to suggest that our American popular government ought not to be a one-lead or a one-star drama of modern civilization,” he said.

“There is no hope for the world unless America can protect and maintain her own institutions,” Hughes said. “The world cannot survive unless America survives.”

After the rally, the actors and musicians went to the home of Dr. C.E. Sawyer for a chicken dinner and lawn party, while Harding and Hughes met privately for about an hour. Hughes was New York governor from 1907 to October 1910, when he resigned to accept nomination as associate justice of the U.S. Supreme Court.

He stepped down from the court in June 1916 to accept the Republican nomination for president, narrowly losing to incumbent Democrat Woodrow Wilson. Hughes, a Glens Falls native, was secretary of state in the Harding and Coolidge administrations, and later was Chief Justice of the United States.