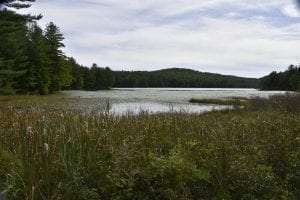 Case in point: the proposed developer of Woodward Lake in Fulton County has submitted additional information to the APA this month of July. The Agency has issued multiple requests for additional information since the applicant, New York Land and Lakes LLC of Oneonta, first submitted an application in 2018. Their plan is to subdivide an undeveloped 1,100-acre lake and forest near Northville in the Adirondack Park into 37 second home lots, driveways and onsite septic. There is no public water or sewer here and the applicant proposes none.

The lake is classified by the APA as Rural Use which encourages “rural uses generally compatible with the protection of the generally intolerant natural resources and the preservation of open space.” The lake and its environs are properly classified. It is a shallow lake surrounded by wetlands. Numerous perennial and intermittent streams enter it on all sides. The surrounding forest is thick and heavily canopied, part of a locally as well as regionally identified matrix forest that stretches to the border of Shaker Mountain Wild Forest, part of the Adirondack Forest Preserve.

More than a half-mile of new road would need to be cut to reach proposed lots on the east side of the lake. On the west side, an existing road would be used to reach multiple lots on each side of the road. The proposed subdivided forest includes more than 600 acres of the most protected private land classification, Resource Management, divided into seven separate ownerships. That RM classification borders the Adirondack “forever wild” Forest Preserve.

For two years this applicant has stubbornly refused to comply with APA standards and requests by failing to provide APA with a true conservation alternative to his preferred layout – which rings the entire Woodward Lake shoreline and upland forest with development and separate ownerships. In the process, he has spent a lot of money on consultants and engineering in anticipation of having his preferred layout accepted. 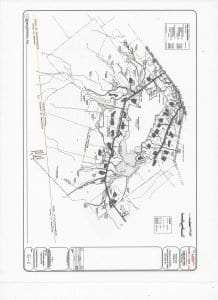 APA administratively created a Large-Scale Subdivision Application in 2018 to achieve better conservation design of large subdivisions in the Park. APA did this under its broad legal authority to administer its application procedures, but also because the agency was under pressure from state legislation, still in committee, that would mandate the use of conservation design principles for large subdivisions, as defined.

The applicant applied to the APA using the Large-Scale Subdivision application, meaning he was highly aware of what it requires and, presumably, was prepared to follow it.

Here is just some of what the APA’s Large-scale Subdivision Application calls for:

“The application process is intended to encourage the development of projects in compliance with the Agency’s review criteria, including protection of open space, wildlife, and habitat resources, and in accordance with the objectives of conservation design.”

Conservation design steps have been described on the APA website for years and have been the subject of public presentations at APA. It is an alternative to traditional development because building lots and driveways are only drawn-in as a final step, not the first step. The process begins with identification of primary and secondary resource values, including a biological inventory, location of wetlands, slopes, soils, important wildlife habitats, scenic resources and more. Once these resources and values are identified through careful methodologies in different seasons of the year, their boundaries are located and mapped. Only after these steps are taken are potential building lots, driveways and septic areas identified in areas that avoid large negative impacts to the resources and values previously mapped. In this way, the development footprint of the project is concentrated, the length and cost of needed infrastructure minimized, and the large ecological footprint of the project, which extends beyond the development footprint, overlapped as much as possible in order to minimize fragmenting effects of development.

As the chair of the NYS Assembly’s environmental conservation committee, Steven Englebright, has stated on many occasions, if there was ever a place to require conservation design of development it is New York’s protected Adirondack Park.

In the Woodward Lake applicant’s latest submission, dated July 2, he reiterates his refusal to submit a conservation design alternative:

“None was prepared for Alternative 2 – Traditional “Conservation Cluster” style subdivision because, as described in the earlier application materials, it is not economically or physically feasible for this property, in this particular location.”

Previously, the applicant had asserted to the APA that a conservation style subdivision was not marketable, therefore it was impossible to seriously consider. Here, he simply reiterates that assertion. Other alternative designs were presented but rejected by the applicant because they would require public water and sewer and would, according to him, be prohibitively expensive. That reasoning was not supported by cost estimates or design alternatives that might prove less costly.

The applicant wants to construct a new 3,000 foot road on the east side of the lake to reach those lake shore lots. APA had previously asked the applicant to consider an alternative that would end the new road on the east side of the lake before it reached a significant perennial stream, steep slopes down to the lake and several wetland complexes bordering the largest wetland on the property. Resource constraints are particularly acute here. One of the proposed lots here would require a steep, 750 ft. long driveway to the new house lot that cuts between two wetland complexes (within 50 feet of each) and, according to APA, would contribute substantial amount of stormwater runoff into the wetlands.

Even knowing about APA’s concern with the severe resource constraints to development at this location, in this month’s response the applicant refused to consider APA’s alternative to shorten the new road.

“An alternative subdivision plan with a shorter road proposed on the east side of the lake, ending before the perennial stream was never considered. This plan would result in the loss of six lots (three of which are waterfront) representing 15% of the already minimal number of thirty-seven lots proposed. The loss of this much revenue would be detrimental to the economic feasibility of the overall project.”

Even after two years of meetings and field visits with the APA, this applicant still chooses not to understand the distinction between the development footprint and the ecological footprint of his preferred design. The latter is “the area beyond the development footprint where direct and indirect impacts of the development extend into adjacent undeveloped lands, affecting the broader ecosystem. This area of impact is much larger than the actual area developed” (Michael Klemens, Ph.D., conservation biologist, Adirondack Wild landscape conservation advisor).

Yet, New York Land and Lakes LLC still asserts this month that:

“The proposed development including roads, building envelopes, common areas and driveways consists of less than a total of 28 acres of disturbance, or less than 3% of the entire property, leaving more than 97% or 1,142+ acres undisturbed.”

From Adirondack research conducted over 20 years and from staff testimony at other project sites, the APA knows that the assertion that 97% of Woodward Lake will remain undisturbed is not true. The ecological footprint of the proposed 37-lots exceeds 28 acres by a lot. APA project staff have distinguished ecological impact zones from development zones in its review of the Barile subdivision in Lake Placid (2017), Highland Farmers subdivision in Keene (2012) and in lengthy staff testimony about the Adirondack Club and Resort in Tupper Lake (2011). Conservative estimates by the Wildlife Conservation Society in the Adirondacks, cited previously by APA, are that the ecological impacts extend 600-700 feet on all sides of new house and driveway construction within a previously unbroken Adirondack forest. Given that figure, the ecological impacts of the proposed Woodward Lake subdivision will spread over hundreds of acres, not 28-acres.

The APA application expects large subdividers to “avoid impacts to the resources on and off the project site.” This applicant submits lots of information, but contrary to the application’s expectation little analysis of how it avoids serious ecological impacts of its project. Woodward Lake is not a pristine wilderness, but it contains a mosaic of sensitive natural resources and wildlife habitats widely dispersed throughout the 1100-acres. Simply placing 37 new houses, driveways and septic tanks out of the wetlands and the streams does not eliminate negative impacts. It spreads them.

The applicant’s design also fragments 600 acres of Resource Management land into 7 separate ownerships. Even without a clustered subdivision plan, this design wastes an opportunity to efficiently manage this 600-acre lot for sustainable forestry and recreation. The applicant makes the unsupported statement that there is potential for mismanagement of this area if managed by one entity as opposed to individual lot owners. This is completely contrary to accepted notions of forest land management. By extending the lots into the Resource Management zone he also extends the impacts of human activities of 7 separate ownerships into what the APA Act says should be the most well-protected and managed Resource Management zone.

As for Woodward Lake itself, the preferred design virtually encircles this lake and directs stormwater runoff from dozens of new driveways and a half mile of new road into the lake. Three dozen septic tanks will have to be especially well-designed so as not to fail over time. In all, 37 separate owners will make decisions about stormwater and wastewater that will affect the water quality of the lake and the downstream water bodies it enters which, in this case, is Great Sacandaga Lake.

What happens next? APA has a decision to make soon. It can choose to declare the application complete or submit another notice of incompleteness, as it should given the applicant’s stubborn refusal for two years to submit a conservation design alternative and his outright rejection of APA’s polite suggestions for improvement so that the lake is not encircled by development and the forest not whacked up into multiple separate ownerships.

If deemed complete, the application is then subject to another round of public comment and forwarded to the full agency for its review. Adirondack Wild will be actively commenting at that stage and will push for a full adjudicatory public hearing and a true conservation design.

This applicant has a previous track record with the APA. For several years, he pushed for a 29-lot subdivision at nearby Woodworth and Hines lakes, a former Boy Scout property. APA staff spent a great deal of time in 2014 attempting to persuade him to design that subdivision differently to avoid resource impacts, but ultimately APA felt time-pressured to accept his design – and to reject an alternative concept submitted by conservation scientists. So, this applicant probably figures that he can again successfully outwait APA at Woodward Lake.

If this applicant’s marketing and economic assertions are again permitted to outweigh the APA’s 2018 large-scale subdivision standards, only a new legislative mandate for conservation design can solve the problem. That legislation, Senate bill 6484 and Assembly bill 8123-a, awaits further action. It has been reviewed and endorsed by environmental (including Adirondack Wild), local governmental and forest industry representatives.

The Woodward Lake application, APA correspondence with the applicant and all stakeholder comments to date are found on the Large-Scale Subdivision pages on APA’s website.

For more about conservation design, see Adirondack Wild’s guidebook Pathways to a Connected Adirondack Park – Practical Steps to Better Land Use Decisions by Michael Klemens, Ph.D. on their website.