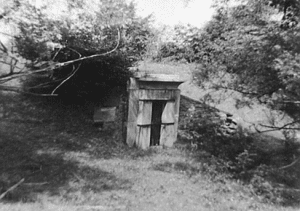 Abraham (1789-1871) and Harriet Best moved from Claverack, Columbia County, NY to Vischer Ferry in the Town of Clifton Park (Saratoga County) in 1815 and built a fine brick federal style home that still stands on Vischer Ferry Road. My late wife Martha and I purchased this home in 1987 and so I live in the “Best House.”

Abraham had red hair and a temperament to match. He was a farmer who seems to have been very opinionated, and sometimes argumentative. He was a staunch member of the Amity Reformed Church, and in 1835 he petitioned the consistory in a suit against a neighboring landowner, John Clute, who he accused of wrongfully removing a fence from his property.

Best again accused John Clute of wrongdoing in 1840. He complained that during the last 16 months, Clute “carried an unholy traffic on the Sabbath by dealing in merchandise and spirituous and other liquors on that day, in a grocery or tavern kept by him on the Canal in the Town of Clifton Park.” (John Clute lived at Willow Spring, on Riverview Road and the Erie Canal).

The consistory advised Abraham Best to drop his complaint because “there have been multiplying difficulties between the accuser and the accused within the last three years past and it is to be feared that accuser entertains a wrong spirit and feelings towards the accused.” Also the consistory had discovered that in the fall of 1838, John Clute had rented his grocery to his son, who was of lawful age.

This action infuriated Best, and he began bad-mouthing the church. He stated “that there was no true religion in the church at Amity, that the members do not walk uprightly; that he won’t advise anyone to join the church; and that he had got his boys or sons to agree that they won’t never join it, or any other.” A battle royal ensued. The consistory tried their best to subdue Abraham Best, but he would have none of it, and took his case to the Classis, but to no avail.

In October of 1865, Abraham Best was arrested for assaulting his neighbor Samuel Althouse. Althouse arrived home from Schenectady in time to see Best stealing his turkeys. He chased Abe Best, and when he finally confronted him, was struck over the head with a six foot long club. Abraham Best went to jail.

Abraham Best died July 1, 1871, and joined his wife in the family vault built into the side of a ravine north of his house. He had disinherited his son, Robert, and his will was contested. Witnesses were called to testify to Abraham’s mental instability at the time his Will was written in 1865.

Edward F. Bullard, one of the witnesses to the Will testified:

“I knew Abraham Best since 1838. In ordering business matters he had good judgement. But in regard to religious matters, schools, taxation and government his mind was entirely unbalanced. When any of his family differed with him on those subjects he became unreasonable and a maniac, and when he made the instrument offered for probate he was very much excited towards his son Robert and in my judgement was not competent to make a will with proper understanding.”

You may wonder how I know Abraham Best had red hair. About seventy years ago neighborhood kids broke into the burial vault. After a troubled psychic (had Best made contact?) informed the former owner of the house, they discovered the vault had been broken into. The vault was then buried, but one of the neighborhood kids, now in his eighties, told me about the red hair.

John Scherer is the Clifton Park Town Historian and also Senior Historian Emeritus at the New York State Museum. He holds a Master’s degree in Museum Studies and American Folk Life from the Cooperstown Graduate Program. John can be reached at jlscherer@aol.com.

Photo of Burial Vault of Abraham and Harriet Best provided.