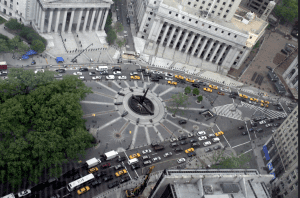 When schools reopen, Health Sciences students hope to lead in-person walking tours and contribute to rewriting the historical narrative to show how the city benefited from the labor of enslaved Africans and from the sale of slave produced commodities in the American South and Caribbean. The students hope many of these sites will be recognized with plaques.

The death of George Floyd at the hands of Minneapolis police has led to a national movement to recognize the impact of racism on American society and to redress past wrongs, including the removal of statues and monuments celebrating a racist past.

The interactive google map allows visitors to simply click on a thumbtack and then on the image upper left to watch a student-produced video explaining the locations historical significance. Click the first thumbtack, Union Square, to watch a video by Dr. Alan Singer of Hofstra University discussing this undertaking.

Sites highlighted on the tour include the African Burial Ground on Duane Street which is a now a national monument. It was used between the late 1600s and 1796 and originally contained between ten and twenty thousand burials. Despite the harsh treatment that these African people experienced in colonial America, the 427 bodies recovered from the site were buried with great care and love. They were wrapped in linen shrouds and methodically positioned in cedar or pine coffins that sometimes contained beads or other treasured objects.

At what is now Foley Square, enslaved Africans, free Blacks and White supporters accused of plotting the 1741 Slave Conspiracy were executed. White New Yorkers, afraid of another slave revolt, responded to rumors and unexplained fires with the arrest of about 150 enslaved Africans, the execution of 35 Blacks and four Whites. Historians continue to doubt whether a slave conspiracy ever existed.

St. Paul’s Chapel is the oldest church building in New York City. Enslaved Africans helped build St. Paul’s and the original Trinity Church but had to pray in separate section and could not be buried in the cemeteries. 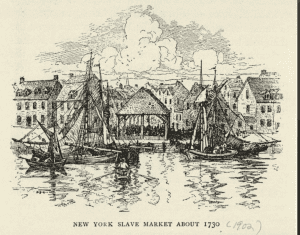 The Wall Street Slave Market was at the corner of Wall and Water Streets. It was a market for the sale and hire of enslaved Africans established in 1711 by the New York Common Council. The office of Moses Taylor, a Slave Trade financier, was at 55 South Street. Taylor was a sugar merchant and banker and a member of the board of the City Bank where he served as its president from 1855 until his death in 1882. Taylor’s personal resources and role as business agent for the leading exporters of Cuban sugar to the United States was invaluable to grow of the institution now known as Citicorp. 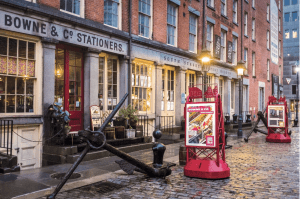 At the South Street Seaport, the original building where Slave Traders met and planned voyages still stands. The men who smuggled enslaved Africans referred to themselves as “blackbirders” and their illegal human cargo as “black ivory.” Their favorite New York City meeting place was Sweet’s Restaurant at the corner of Fulton and South streets. There is no historical marker at this site.