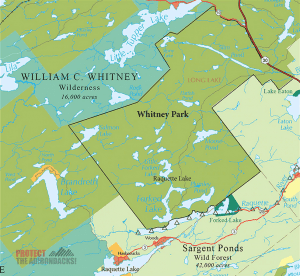 The family of recently deceased Saratoga civic and philanthropic leader Marylou Whitney announced today that the 36,000-acre Whitney Park lands in the center of the Adirondack Park are for sale.

John Hendrickson, the husband of Marylou Whitney, stated in the Wall Street Journal that his asking price is $180 million. Whitney Park is located in the Town of Long Lake, in Hamilton County and is one of the largest privately held contiguous tracts of land in the 6.1 million-acre Adirondack Park.

The Whitneys have owned the property since the late 1890s when William C. Whitney brought together 80,000 acres at the headwaters of the Beaver, Raquette and Bog rivers for $1.50 per acre.  Wm. C. Whitney was a Bourbon Democrat who served from 1885 through 1889 as Secretary of the Navy under Grover Cleveland.

Marie Louise “Marylou” Schroeder was born in Kansas City, and married Frank Hosford, heir to the John Deere fortune. After they divorced, she became the fourth wife of Wm. C. Whitney’s grandson, Cornelius Vanderbilt “Sonny” Whitney, in 1958.  At his death in 1992 Sonny and Marylou Whitney owned 51,000 acres around Deerlands.


In 1997, Mary Lou Whitney (and new husband 32-years her junior John Hendrickson) sold a 15,000-acre tract around Little Tupper Lake to New York State for $17.1 million, including nine other lakes and the former Whitney Headquarters. The deal was constructed by then Governor George Pataki, The Nature Conservancy, the Adirondack Land Trust and the DEC. The Whitney family urged Governor Pataki to name the Little Tupper Lake tract the William C. Whitney Wilderness Area.

Hendrickson told the Wall Street Journal that the current Whitney Park includes Deerlands, a great camp on Little Forked Lake that sleeps 34 in 17 bedrooms; a 19th century “trappers cabin” and a logging operation. Hendrickson said the estate’s collection of Adirondack guide boats and canoes, housed in a two-story boathouse, are being sold.

“Whitney Park has been at the top of the land protection priority list of New York State for the last 50 years. The property was identified by the Temporary Study Commission in the late 1960s, the Commission on the Adirondacks in the Twenty-First Century in 1990, and in the New York State Open Space Plan for the last 25 years. The property includes 22 lakes and ponds, over 100 miles of undeveloped shoreline, and is the missing link to historic Adirondack canoe routes from the 19th century,” said Peter Bauer, Executive Director of Protect the Adirondacks.

Adirondack Council Deputy Director Rocci Aguirre said that Whitney Park is also listed in the Adirondack Council’s 2020 VISION research series as a part of the proposed 400,000-acre Bob Marshall Great Wilderness in the west-central Adirondack Park’s Oswegatchie River basin.  He said the benefits of public ownership of the Whitney Estate would be a motor-free wilderness large enough to accommodate the return of timber wolves, moose and other extirpated species in an area where there are few roads or communities where conflicts could arise.

“Whitney Park is a gem that defies description in many ways. It’s been the top of every list for the most important tract of private land in the Adirondacks. The intact forests and beauty and sheer number of lakes and ponds set this property apart from all others. The Whitney family were marvelous stewards of the property for more than 100 years. Their commitment to the Adirondacks and environmental protection was clearly demonstrated by the protection of Little Tupper Lake in the 1990s ” Peter Bauer said.

David Gibson was the Executive Director of the Association for the Protection of the Adirondacks. (William C. Whitney was a trustee of the Association starting in 1902). Gibson said the State should act immediately to acquire the Whitney estate lands.

“Even during the pandemic, this project ought to rise in levels of priority and urgency,” he said. “The Department of Environmental Conservation and the land conservation community need to dust off prior studies and immediately resume efforts to work with the landowner and a variety of Park stakeholders to conserve the tract. The Town of Long Lake must be involved, as must the DEC’s Region 5 Open Space Conservation Advisory Committee, which has not met in quite a while,” continued Gibson. “The Region 5 committee has discussed this area quite a bit in the past since Whitney Park was listed as a High Priority project in the state’s Open Space Conservation Plan starting in 1992.”

“Future expansion of the current 15,000-acre William C. Whitney Wilderness would be seamless and make a great deal of management and stewardship sense to us, particularly at places contiguous to the existing Wilderness, like Salmon Lake and Slim Pond.” Gibson said.   “In other places which have greater cultural significance, conservation easements or other state land classifications might be more appropriate. The key is to pull people together at this stage, dust off the prior planning studies and re-start the conversation. The need for a coordinated conversation about conserving this property should re-commence immediately.”

“Normally, a bond act would bypass the Governor and go straight to the voters for approval.  However, due to the economic uncertainties caused by the COVID-19 crisis, the Legislature made the unusual move of granting the Governor the power to remove it from consideration by the voters.  He withdrew it from the statewide ballot today, citing the lack of federal aid to states as his reason,” Rocci Aguirre said.

Map of Whitney Park provided by Protect the Adirondacks.