But attitudes changed. By the mid-nineteenth century, civic banquets would inevitably offer turtle on the menu.

In 1783, at Fraunces Tavern in the city of New York, George Washington feasted on turtle washed down with white punch during his farewell banquet for Continental Army officers. At Abraham Lincoln’s second inauguration in 1865, the celebratory meal began with terrapin as a hors d’oeuvre. In Hard Times Charles Dickens associated social privilege with being “fed on turtle soup and venison.”

The Temple of Turtle

The turtle’s fate is part of a colonial narrative. Initially, its meat was eaten by West Indian slaves. In the end, their masters joined them. In his Natural History of Jamaica (1725), Hans Sloane recommended its consumption as local beef was difficult to keep, expensive in price, and poor in taste. Turtle flesh by contrast was versatile. It could be salted and baked or reduced to a broth. For West Indian colonials turtle meat was a staple food. They brought the habit back to Britain. The first known turtle recipe (handed to him by “a Barbados Lady”) was provided by Richard Bradley in The Country Housewife and Lady’s Director (1732). He compares the taste of turtle flesh to that of veal or lobster.

In 1740 Admiral George Anson was dispatched by the Royal Navy with a squadron of eight ships to attack Spanish possessions in the Caribbean. His crew suffered badly and many of the men succumbed to starvation or scurvy. After his return, various tales of Anson’s voyage were printed. The most influential account was compiled by Richard Walter (Anson’s chaplain) and published in London in 1748. In A Voyage Round the World in the Years 1740-1744, he described fresh green sea turtle as a wholesome dish that had nourished sick sailors back to health. Walter’s richly illustrated tale became a bestseller, going into dozens of editions, and being translated into numerous languages. His book contributed to the taste for turtle which gourmets hailed as a “key dish of grand English cuisine.”

Anson was raised to the rank of nobility. In 1754, the Whitehall Evening Post reported that he had gifted a three hundred pound turtle to the kitchens of White’s Chocolate House in St James’s Street, London’s oldest gentleman’s club. All-male clubs and societies competed with each other to put the weightiest turtle on their table. When in male company, size matters. Food was judged by its political count of calories. Turtle feasting was a patriotic deed. Through the stomach, London revealed itself as the hub of the imperial world. The Low Countries were in decline; France was ridiculed as an effeminate nation; the Iberian Peninsula had lost its colonial might. Britain ruled the waves. For the privileged few, an age of feasting and frolicking had begun. London was intoxicated with self-admiration.

The London Tavern, Bishopsgate Street, was famous for serving turtle. The size of the place was phenomenal, employing an army of sixty to seventy servants. Its cellars were filled with barrels of porter, pipes of port, and butts of sherry. At any time some 1,200 bottles of champagne were waiting to be uncorked. Turtles were kept in massive tanks and, at various times, some two tons of turtle could be seen swimming in one vat. It was a skillful and time-consuming exercise to prepare a turtle dinner in the shape of calipash (upper part, green meat) and calipee (under part, yellow meat). The London Tavern made a huge success of the challenge. It was the Temple of Turtle. 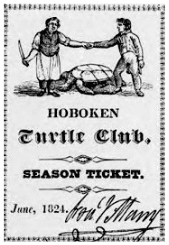 American colonists inherited from the English a liking for turtle soup. Here too, the proclivity was associated with power. The Hoboken Turtle Club was founded in 1796 and is reputed to have been the oldest social club in the United States. A group of wealthy Manhattan businessmen and politicians would cross the Hudson to dine on turtle soup. Once the tradition was set, the annual feast was moved into the city.

By 1878, Tammany Hall at 44 Union Square was hosting the event. By then, entrance to the club had become the most coveted membership in town. Marking the 100th anniversary of the Club, it was pointed out that the Presidents Washington, Jefferson, Franklin, Burr, and Clay, had all been fellow Turtles.

In June 1893, the Club found a new home at the Kingsbridge Hotel, Spuyten Duyvil in the Bronx, where diners achieved unprecedented levels of excess in eating and drinking. It had become a glutton’s gathering. According to newspaper reports breakfast consisted of “stewed and fried eels, baked and fried bluefish, porterhouse steak, and turtle steak”; dinner was a combination of brandy, boiled egg, and turtle soup. During the first decennia of the twentieth century, the club’s membership declined. 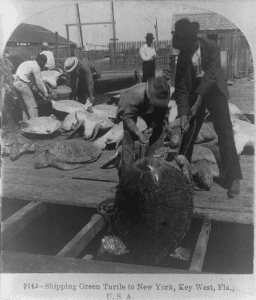 The Terrapin Lunch restaurant at the corner of Broadway and Ann Street, operated by Alexander Welsh during the 1830s, was famous for its turtle soup. The name of the restaurant indicates a change of menu. When green sea turtles dwindled in numbers, they were replaced by more local terrapins. Plentiful in the swamps and creeks across the United States, they had long been consumed by Native Americans. (Turtles also fed enslaved African-Americans). As late as the Civil War, Confederate soldiers supplemented their rations with the abundant reptile. By the mid-nineteenth century, terrapins were being prepared by gourmet chefs. Even Delmonico’s in New York served the delicacy. Customers consumed bowls of soup to which a fair amount of sherry (or Madeira) was added.

By the 1910s, terrapin was increasingly out of reach for all but the rich, due to shrinking populations and rising prices. In 1920, the United States ratified the Eighteenth Amendment, banning the production and sale of alcoholic beverages. Sherry or Madeira were difficult to procure and, as a consequence, demand for turtle soup plummeted. It was a mortal blow to the hospitality industry. Restaurants from New York to Los Angeles were forced to close down. Prohibition may have saved terrapins from extinction.

The process of canning turtle products started around 1870. Thomas Kerrison Bellis – known as the ‘Turtle King’ – set up a company that for half a century dominated the market (the firm was liquidated in 1922), producing turtle soup, herbs, soap, pate, jellies, sun-dried turtle and preserved turtle. By 1878, some 15,000 live specimen were shipped across the Atlantic to British ports. It wreaked havoc on the species. With turtles in ever shorter supply, prices were driven up which led to the creation of mock turtle soup.

Made of calf’s head, using brains and organ meats to duplicate its texture, and flavored by a selection of vegetables and garden herbs, the ersatz version was an affordable replacement. Martha Lloyd, Jane Austen’s friend and companion, made a note in her Household Book of a recipe described as “Mrs Fowle’s Mock Turtle Soup.” This set of instructions may have inspired cartoonist John Tenniel. His illustration of “Alice with the Mock Turtle and the Gryphon” in the first edition (1865) of 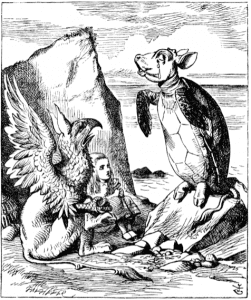 Lewis Carroll’s Alice’s Adventures in Wonderland shows a Mock Turtle with the body of a terrapin, and the head, hooves, and tail of a calf.

Feeding entrenched soldiers during the Great War was problematical and the production of tinned stews and packed soups took on a new urgency (canned tuna dates from around that period). Horlicks created malted milk tablets and Oxo developed cubes of meat extract. The company also produced twelve varieties of Gong Soup, including Ox Tail, Mulligatawny – and Mock Turtle. Mass production of canned calf’s head soup was started by the Campbell Soup Company. Mock turtle soup was one of the 57 varieties produced by Heinz circa 1934 (listed as no. 14 in the advertised range). Andy Warhol said it was one of his favorite soups. 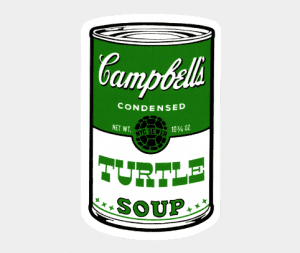 Winston Churchill was partial to the delicacy too. During the historic Atlantic Charter Meeting with Franklin Roosevelt at Placentia Bay, Newfoundland, in August 1941, he proposed to revive a Royal Navy tradition and serve turtle soup for Sunday lunch aboard HMS Prince of Wales. By coincidence his aide, Commander Tommy Thompson, had come across a stack of tinned soup in a Piccadilly grocery shop that was exempt from rationing. He bought the lot on behalf of Churchill’s naval kitchen staff. The Allied battle against Nazi Germany was planned over a bowl of turtle soup.

With an ever growing choice of convenience food and frozen dinners, home cooking adjusted and our eating habits changed. By the mid-1960s, turtle products were taken off the menu and disappeared from shop shelves. Public opinion began to unfold as a factor in commercial decision making. Campbell’s discontinued their range in 1955. Heinz stopped its turtle soup in the 1970s. Sea turtles were first included in the 1975 Convention on International Trade in Endangered Species. The turtles were left in peace at last, but a long crawl to recovery lays ahead.