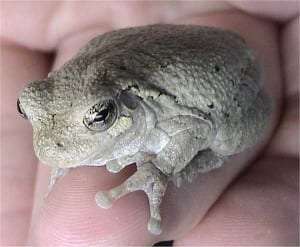 Spring is a season when the greatest abundance of natural sounds echo across the landscape. During the day, birds are primarily responsible for the variety of musical calls; however as darkness approaches, especially when the weather is mild, the voices of amphibians produce our most captivating sounds.

Around the alder-laden shores of ponds, marshes and rivers, choruses of tiny spring peepers regularly drown out the songs sung by all other creatures. During the latter part of May, after dusk, toads can be seen heading to similar shallow wooded waterways to engage in their nocturnal serenade.

Around Memorial Day, if the weather has been warm and the temperature at the surface of lakes and marshes nears sixty degrees, the short, yet distinct call of the green frog can be heard. It resembles the note made by a plucked banjo string (and can be heard here). It is also during this time of year when the unique voice of the gray tree frog radiates from certain woodland aquatic settings (hear one of those here).

The gray tree frog has expanded its numbers over the past several decades; yet even in places where it is common, this amphibian is a challenge to see. While its name implies that it is gray, this creature varies in color depending on the background in which it is presently located. Should it be perched next to a clump of lush foliage, its skin develops an olive green shade. Moving to a backdrop of dead leaves and dried vegetation, this amphibian eventually becomes a similar brownish color. If it is clinging to a twig that supports gray bark, the gray tree frog becomes gray. The color changes experienced by this amphibian are rather subtle and not as dramatic as those of creatures like the chameleon, however, its protective camouflage is as effective as that of any form of wildlife in the State.

The small size of the gray tree frog also contributes to its inconspicuous nature, as this amphibian never exceeds 2 inches when fully grown. Additionally, its preference for residing on branches and twigs above eye level, rather than on the forest floor or in places of shallow water, causes it to be overlooked by passersby. During most of the summer, this small amphibian remains well above the ground, where it scours the leaves and twigs for various bugs and invertebrates, just as warblers or vireos do.

Like tree frogs in other regions of the world, the gray tree frog has toes equipped with special suction-cup ends that allow this miniature vertebrate to effectively attach itself to tree surfaces. Even though the trunks and limbs of many trees and shrubs possess rough-textured bark that would seem to prevent any such device from adhering to their surface, the pads on the bottom of its toes contain a secretion that greatly aids in the ability to temporarily stick to such objects.

Roughly four to six weeks after emerging from their winter dormancy, gray tree frogs descend from their lofty perches and migrate toward suitable bodies of water in which to breed. Small, shallow woodland ponds are favored breeding sites, especially those that contain trees and shrubs along the shore with branches that overhang the water. Aquatic settings that lack fish and other tadpole predators are also strongly favored. In larger bodies of water, their offspring would be quickly eaten after they emerge from their eggs in late spring.

Like the toad, the male gray tree frog’s breeding call can be described as a trill. However, the voice of this creature is more powerful and carries for a greater distance than the toad’s. Also, the gray tree frog’s song is shorter in duration, as its burst of energy lasts only about one second.

While the gray tree frog is said to prefer deciduous woodlands over dense stands of conifers, I have occasionally heard a chorus of its music radiating form bodies of water surrounded by nothing but softwoods at this time of year.