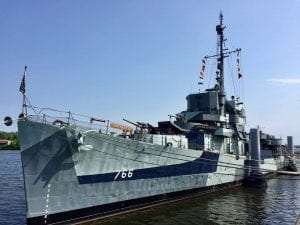 USS Slater, the last Destroyer Escort afloat in America, is expected to depart Albany via tugboats on Sunday, July 5th at 7 am for her voyage to Staten Island for shipyard repairs.

The voyage is expected to take approximately 20 hours, but due to traffic on the river it is impossible to predict arrival times. Updates on USS Slater‘s location will be posted on Facebook throughout the day.

Many New Yorkers watched the ships progress during its last voyage in 2015. The best places to view the ship are from riverfront parks and the Walkway Over the Hudson in Poughkeepsie. Be sure to practice good social distancing measures.

It may be possible to track USS Slater’s progress by following the tugs on www.marinetraffic.com. Names of tugs will be released as that information becomes available.

It is expected that the ship will return and staff will have the ship open to the public by August 5th, 2020. More specific information will be released as it becomes available. For updates, visit the USS Slater website.

Once reopened, USS Slater’s hours will be Wednesday through Sunday, 10 am to 4 pm, through the end of November. The ship will be located in Downtown Albany at the intersection of Broadway and Quay Street.

USS Slater is owned, maintained, and operated by the Destroyer Escort Historical Museum, a private, non-profit, charitable organization that receives no regular government support. Donations to the Museum are tax-deductible to the extent allowed by law.