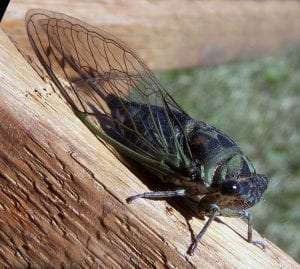 Probably everyone has a sound they associate with high summer. For me, nothing says “holy cow, it’s hot” like the drone of cicadas, their song is a miniature buzz saw that cuts across a hot afternoon, undulating a bit and then dropping off near the end of its arc.

Cicadas are stout, ancient-looking bugs with bulgy eyes and clear wings. While the largest species is about three inches long and has a seven-inch wingspan, the ones in our neck of the woods range from 1 to 2.5 inches in length with a wingspan of three inches or so.

It’s nearly always the males of a species who develop some loud or gaudy trait to attract a female. They might wear bright wing patches, croak loudly, hammer their beaks on dead trees, or even get a mullet and a sports car. True to form, it is the male cicadas who buzz in their bid to attract mates. Unlike crickets and katydids who chirp by rubbing one wing against the other, known as stridulation, cicadas are unique musicians.

Only a committee – or perhaps Rube Goldberg – could have made the noisemaking apparatus of male cicadas more complicated. Cicadas use tymbals, two structures made of chitin, the same stuff as their exoskeleton, to sound off. These highly complex organs are low on their abdomen, towards the front. Cicadas contract and relax their abs (finally, a legitimate use for a six-pack) to flex these tymbals against one another to produce clicks. But that’s only part of it.

In contrast to human males, who are prone to being vacuous between the ears and overstuffed in the middle, male cicadas have adequate brains and hollow abdomens. This abdominal void acts as a sound box much in the way the body of a guitar does.

And the Goldberg music machinery goes on: In the cicada thorax are enlarged cavities that serve as resonance chambers (this smacks of the work of a subcommittee, I think). These chambers allow a cicada to amplify its call. Then it raises and lowers its abdomen against the branch (or whatever) to further modify the sound. Even if you hate cicada calls, you have to respect the lengths it takes to create them.

In terms of reproductive strategy, cicadas fall into two camps, periodical and annual. It was a real letdown to discover that periodical cicadas do not work in libraries or in the publishing industry. That would be just too cool. They are so called because periodically – every 13 or 17 years, depending on the brood – they complete their life cycle as a group and emerge in droves. Why they elect to come out only in prime-numbered years is anyone’s guess. I’d say it’s the kind of thing a librarian might opt for.

In New York State we have annual, or dog-day cicadas, which can be green, brown or black. Ancient Greeks named the hottest part of summer “dog days” because they observed Sirius, the Dog Star, rising at dawn during that time. We get dog-day cicadas every year, but in very modest numbers compared to a periodical brood.

Whether annual or periodical, cicadas follow the same pattern. Immature or nymph cicadas burrow into the ground and feed on tree roots, either hardwoods like maple and oak, or pine (why spruce and cedar are off the menu I have no idea). According to research, this feeding does no real damage to trees. When they’re full-size, nymphs emerge from the soil, climb up on a tree trunk and “unzip” their exoskeleton to reveal an adult. You’ll find the empty husks in parks, woods and back yards.

The adults use a syringe-like mouthpart to drink tree sap, but reportedly eat but little. They live just long enough to sing, mate and die, dodging predators in between such chores. Given their size, cicadas make yummy prey for birds, reptiles and small mammals. A fearsome-looking giant wasp called the cicada killer is strong enough to grab cicadas and cart them home for baby food. Cicada killer wasps, while startlingly big, are not aggressive, and stings are extremely rare.

Adult cicadas may not feed much on trees, but they do cause some damage. Mated females use their ovipositors to slice open the bark of a hardwood twig so she can deposit her eggs in the gash. This sometimes causes the twig to break, and if there are a lot of cicadas around it can look as if something is wrong with the trees.

Before summer gets away from us, take a minute to appreciate a dog-day cicada song on a sizzling day, preferably in the shade with a cold drink. It won’t be all that long before we’ll be missing the dog days again.

You can listen to an annual cicadas HERE.