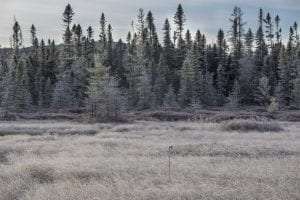 A study published this week in the journal Wetlands documents an invasion happening in the Adirondacks: the black spruce, tamarack, and other boreal species are being overcome by trees normally found in warmer, more temperate forests.

Ultimately, researchers from the SUNY College of Environmental Science and Forestry (ESF) predict that these invaders could overtake a variety of northern species, eliminating trees that have long been characteristic of boreal wetlands in the Adirondacks.

“Shingle Shanty Preserve was an ideal location to conduct this research,” Stephen Langdon, Shingle Shanty Director and principal investigator said in an announcement of the study’s publication. “Peatlands, like those at Shingle Shanty Preserve, are some of the best protected, most-intact examples of the ecosystem around the world at this latitude: a fact that makes them a critical resource for understanding the biological response to climate change and nitrogen deposition.”

Langdon has 25 years of experience in the Adirondacks working in conservation from shovel-in-hand trail maintenance to biodiversity research with government and private organizations. “These are hard-earned data,” he said. “The result of weeks of bushwhacking through buggy bogs and thick black spruce forests.”

Researchers collected data on vascular species, including their composition, environmental drivers, and ages in 50 plots spread throughout a nearly 1,000-acre portion of the Shingle Shanty Preserve.

“A peatland complex of this size at its southern geographical limit in the eastern U.S. is highly significant ecologically and for its conservation values,” said Don Leopold, ESF Distinguished Teaching Professor and research collaborator. Leopold has studied peatlands throughout the U.S. for the past 35 years.

Large peatlands, like Shingle Shanty Preserve near their southern range limits in eastern North America, are particularly important for biodiversity conservation because they are nested in a relatively intact biome and they are a refuge for many disjunct boreal species at their southern range limits, like the threatened spruce grouse. The biodiversity in these peatlands is threatened by direct modification (e.g., drainage for agriculture) and by invasions of woody species linked to human-caused environmental changes such as climate warming and atmospheric nitrogen deposition

“This research should serve as a wake-up call, as it provides an early warning that even the most remote and protected boreal peatlands may be lost at their southern range limits, in potentially just over a few decades, due to this ongoing and abundant colonization by temperate tree species –a process likely to be dramatically accelerated by continuously warming climate and fertilizing effects of nitrogen emissions,” said Martin Dovciak, ESF Associate Professor and research collaborator. Dovciak has studied forest dynamics in a variety of forested ecosystems in North America and Europe over the last 25 years.

Shingle Shanty Preserve is a 23-square-mile remote tract of land protected by a conservation easement and located in the middle of the 6-million-acre Adirondack Park, about nine miles west of Long Lake, Hamilton County, NY.  The Preserve and Research Station was formally established as a 501(c)3 non-profit biological field research station in 2008 with a mission of supporting scientific research to improve the understanding and management of Adirondack Ecosystems.

This remote, private Preserve is positioned at the top of the Beaver, Raquette and Moose River watersheds and has 2,000 acres of pristine boreal wetlands, 9 lakes and ponds, 6 miles of headwater streams and over 12,500 acres of northern hardwood and successional northern hardwood forests.

Shingle Shanty is home to numerous species that benefit from large scale protection, including a suite of boreal bird species such as spruce grouse, rusty black birds and olive-sided flycatchers, as well as moose, American martin and river otters.

The Preserve is located in an unusually cold area for its latitude in the southernmost area of USDA hardiness Zone 3 in the northeastern United States. Temperature data loggers at the site recorded a growing season of only 19-days as recently as 2014 in the low-lying peatland complex.