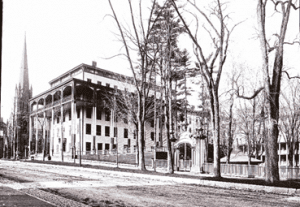 The United States Hotel in Saratoga Springs, built in 1824 on the southwest corner of Broadway and Division Street, grew over the years to have more than 500 rooms. On Sunday, June 18, 1865, the guests were preparing to take carriage rides out to Saratoga Lake, a favorite diversion of the time, when a fire broke out. The flames spread quickly, devouring the hotel in a spectacular blaze.  A year later the community’s other massive hotel, Congress Hall was also destroyed by fire.

The two burnings exacerbated an existing shortage of guest rooms in the increasingly popular resort town. By 1868, a rebuilt Congress Hall was completed, but the United States Hotel remained out of service for nine long years. During the gap, the Clarendon Hotel, on Broadway adjacent to Saint Peter’s Church, filled the gap.

The Clarendon evolved from a boarding house first opened in 1840 by the Brotherson sisters and catering to fashionable society. In 1860, Mrs. Mary I. Jones purchased the boarding house, made many changes and named it The Clarendon. Jones hired Alexander Putnam to manage the hotel. In the midst of the Civil War, Charles E. Leland, of the noted hotel operating family also associated with the Grand Union Hotel, leased the Clarendon and purchased it ten years later in 1873. Leland also purchased the Washington Spring and incorporated it into the Clarendon Hotel property. 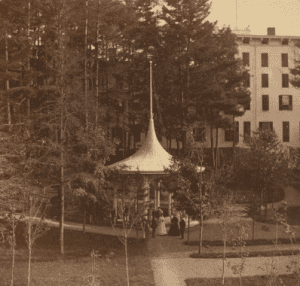 The Clarendon Hotel, a wooden structure, was painted white with green shutters on every window. The Washington Spring, on the grounds of the Clarendon, had been discovered and tubed by Gideon Putnam in 1806. It was frequently called the “Champagne Spring,” for its sparkling properties. It was one of the most popular springs in Saratoga, and was thronged with afternoon visitors. (A spring discovered later by Leland was named after him.)

Three concerts a day were held on the Clarendon’s broad piazza, which extended around the hotel and overlooked a beautifully landscaped interior court. Southwest of the Washington spring were bowling alleys, and a pistol shooting gallery, conducted in the 1880s by John Gaffney. The Clarendon Hotel and Washington Spring were last listed in the city directory in 1905. The Clarendon was later razed, and the property purchased by Father James Flood of Saint Peter’s Church.

The property remained vacant for 50 years however. The raising of the old hotel left a hill running from Broadway to Hamilton Street that was used for sledding. In the 1950s, St. Peter’s Academy outgrew its building on Hamilton Street and the new St. Peter’s Academy High School was built on the site of the old Clarendon Hotel.  Dedicated in November of 1954, the school was renamed Saratoga Catholic Central High School around 1977.

Mary Ann Fitzgerald, Saratoga Springs City Historian since 2004, earned her Bachelor’s degree in American Studies from Skidmore College in 2000. She retired from Skidmore College in 1999. Mary Ann co-founded the West Side Oral Narrative Project in 1998. She worked for the Saratoga Springs History Museum in the George S. Bolster Collection 2001-2003. You may contact her at maryann.fitzgerald@saratoga-springs.org.


This essay is presented by the Saratoga County History Roundtable and Brookside Museum. Visit their websites and follow them on Facebook.