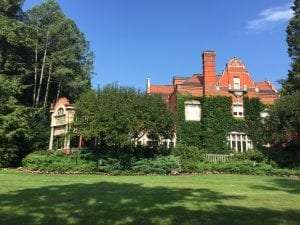 The Saratoga Springs Preservation Foundation has announced their Summer Sunday Strolls are set to return on Sunday, June 21st, while remaining safe and socially distanced.

Summer Sunday Strolls will be offered every Sunday through September 6th at 10:30 am in various neighborhoods throughout the city.

The first of twelve walking tours of historic Saratoga Springs will be The Good Life: North Broadway led by the Foundation’s Executive Director, Samantha Bosshart on Sunday, June 21st, at 10:30 am. Tour this famed corridor lined with grand Queen Annes built by Saratoga’s most prominent figures such as Lucy Skidmore Scribner, Fred Cluett, William B. Gage, and Senator Brackett. The tour, sponsored by Impressions of Saratoga, meets at the northwest corner of North Broadway and Van Dam Street in front of Witt Construction.

The second tour, set for June 28th will be Historic Congress Park & Canfield Casino with Charlie Kuenzel, President of the Saratoga Springs History Museum. This tour celebrates the 150th anniversary of the Canfield Casino while exploring the historic landscape architecture of Congress Park, the early springs, and other facets of Saratoga. The tour will meet at the front steps of Canfield Casino. Other tour topics this season highlight prominent women of Greenridge Cemetery, the celebrated area surrounding the Saratoga Race Course, and the historic Spa State Park, among many others.

All Sunday morning tours last approximately 90 minutes and require walking and standing on varied terrain. Due to current restrictions in New York State, Summer Strolls will be limited to twenty guests, which currently is less than the maximum of 25 that is currently allowed, and tickets must be purchased in advance until otherwise noted. Everyone will be required to wear a mask and social distancing will be encouraged when possible. The cost per tour is $15 for SSPF members and $20 for non-members. Members who have received complimentary Stroll passes will have those honored for their value of $10 and will be required to pay the difference of $5.

In addition to the Summer Sunday Strolls, the Foundation will be offering bike tours of the Saratoga Spa State Park on Saturday, July 11th & August 22nd and Sunday, September 29th. Bike tours last approximately three hours and space is limited.