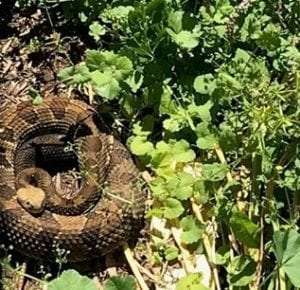 Environmental Conservation Officer Jeff Cox reported that on June 20th he received a call from a concerned homeowner in Copake reporting a large rattlesnake on their front porch.

The homeowner sent pictures of the pit viper, confirming it was a timber rattlesnake. Timber rattlesnakes are the largest venomous snake in New York and listed as a threatened species. The rattlesnake appeared to come and go over the weekend before slithering under the house, causing the homeowner to worry it was taking up residence there.

Members of DEC’s Division of Law Enforcement consulted with wildlife staff and decided to trap and relocate the rattlesnake. After a few unsuccessful attempts, ECO Cox wrangled the rattlesnake into a container on the morning of June 24.

The rattlesnake was transported to a location in the Taconic Mountains, which is a known den site and released unharmed. The homeowner expressed great appreciation that the unwanted guest was removed from their residence.

Photo of Rattlesnake slithers under porch of Columbia County residence.