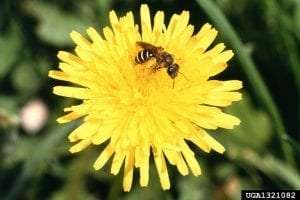 The old saying “The road to hell is paved with good intentions” has been a great comfort to me over the years, since I figure that means the road to heaven is paved with bad thoughts, which are usually easy to come by.

Since ancient times, we have built all manner of roads, highways, byways, boulevards, terraces, turnpikes, tow-paths, and bike paths. But given the astonishing pace at which our native pollinator populations are dwindling, it’s a critical time to blaze a new kind of road. A pathway, to be specific.

Twelve years ago, Seattle-based artist and environmentalist Sarah Bergmann developed the concept of the Pollinator Pathway. It has been described as a “participatory art, design and ecology social sculpture,” a linear habitat to help pollinator insects find food as they wend their way through cities and other challenging landscapes. Since that time, the idea has spread throughout North America and beyond.

Pollinator pathways can be as simple as a line of flowering plants between one backyard and another, or as grand as a “flower belt” that connects green spaces across a major urban center. The website www.pollinatorpathway.com has tools and resources, and lists major criteria such as the need to collaborate with various groups and agencies, use native plants primarily, and have a long-term maintenance plan. Like so many great ideas, the pollinator pathway notion has “gone wild,” and is being adopted by folks who are not always familiar with Ms. Bergmann’s work.

When establishing any size pathway to benefit pollinators, it’s important to include plant groupings of many colors, heights, and flower shapes. Having plants in flower throughout the entire growing season is key as well. These considerations help ensure the greatest variety of pollinating insect species can take advantage of the nectar and pollen.

Presumably, non-insect pollinators are excluded from these endeavors. Lemurs, lizards, bats, monkeys, opossums, and about fifty other vertebrate species also pollinate plants. I imagine attracting hordes of lemurs, monkeys or lizards to urban pollinator pathways would be a cool sight, but I can think of a few drawbacks as well.

Although the honeybee makes a honey of a pollinator poster-child, in the larger scheme of things it contributes precious little to the production of domestic and wild foods. In a healthy environment, and even in many compromised ones, it is our native moths, butterflies, wasps, bees, flies, beetles and other insects which do nearly all pollinating of wild and domestic crops. In a region like northern New York State, the impact of honeybees on pollination is negligible, with the possible exception of very large orchards in the Champlain Valley.

Not to say we shouldn’t still raise honeybees and be concerned about their health – honey and other bee products are important crops – but we should have a more accurate picture of who does our pollinating. Honeybees are essential only when intensive agriculture has removed plants upon which native insects would normally depend, such as in California’s almond groves, and even in some fruit-growing regions around the Great Lakes.

The reasons pollinators are in so much danger that they require special trails to get across town are complex, but they have much to do with pesticides. A class of insecticides called neonicotinoids, neonics for short, have long been implicated in pollinator decline. Used in everything from lawn-grub control to soybeans, these chemicals render an entire plant toxic, including its pollen. Bad news for insect pests, and also for bees and butterflies. In April 2018, the European Union permanently banned three of the most popular neonics in order to protect bees.

And fungicides, once believed safe for bees, have recently been named as a suspected cause of pollinator decline. In a November 2017 report, a Cornell-led team of researchers from across the Northeast concluded that routine use of fungicides in agriculture weakens bees to the point they often succumb to bad weather or common diseases, factors which normally would not prove fatal. Today, 49 species of native bees are considered at risk, with bumblebees especially hard-hit.

If there was a pollinator prize, it would likely go to our fuzzy native bumblebee species. Hairiness is one reason bumblebees are more efficient pollinators than, say, yellow jackets, which by the way contribute a fair bit to pollination. Another thing is that bumblers can operate at much colder temperatures than other insects – whether their wonderful fur coat helps with that, however, I do not know.

In addition, their “bumble” is part of their beauty. It turns out they vibrate the air at a Goldilocks frequency, one just right to shake loose pollen inside certain flowers such as tomatoes. In other words, they can do drive-by pollination without needing to land on the flower. And in the interest of irrelevancy I will point out that scientists at Queen Mary University of London taught bumblebees how to roll a tiny ball into a little hole to get a sugar-water reward. I assume the researchers are now busy with bumblebee golf tournaments.

If you are not ready to mark out a pollinator superhighway, you can help make your community more bee- and butterfly-friendly by raising awareness about these issues. Ask your local officials to change zoning laws to allow more diverse landscapes in our cities, towns and villages. Neat lawns are deadly to pollinators – leave those dandelions, for goodness’ sake. Please, help stamp out tidiness! This will encourage plant diversity and greatly benefit pollinators – and ultimately, us.