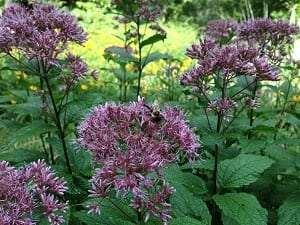 According to legend, Joe Pye was a Native American herbalist who used local plants to cure a variety of illnesses including typhoid fever. For years, it was unknown if Joe Pye was a real person or a botanical myth, that is until research confirmed the plant’s name originated from the nickname of Joseph Shauquethqueat, a Mohican chief who lived in Massachusetts and New York in the 18th and early 19th centuries.

These tough perennial flowers can withstand a wide range of conditions including high summer temperatures and a lack of water. In ideal conditions, they do prefer slightly moist soils and in the wild they can often be found growing in wetlands. The flowers bloom in late summer when many other flowers begin to wane.

Celebrate National Pollinator Week by adding some native plants to your backyard or container garden. A list of native suggestions can be found on DEC’s website.